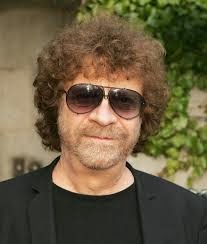 One of my great contradictions is telling my daughters how unimportant it is to be cool while devoting much of my wakefulness to remaining what I consider perfectly cool.

So what will I do today to extend my career cool?

The name may leave more than a few of you scratching your heads. The English musician’s never had a hit single released under his own name. But he’s the spiritual godfather of one of the most tuneful epoch’s in music history.

He’s to the Traveling Wilburys what Phil Robertson is to “Duck Dynasty,” only without all the homophobic fondness for Jim Crow Dixie.

Besides the Wilburys, Lynne is the creative genius behind some of the best work of Tom Petty, George Harrison and Roy Orbison.

And before all that, he gave us some of the most indelible, unique and joyful music ever recorded.

Maybe it’s just me, but I’m sensing a new and overdue appreciation for a band whose infectious hits -- “Mr. Blue Sky,” “Strange Magic,” “Telephone Line,” “Living Thing,” “Evil Woman,” etc. -- were on every one’s lips throughout the 1970s.

Many of us will never get “Can’t Get it Out of My Head” out of our heads.

Trailers for the well-reviewed "American Hustle" are featuring a compelling string from ELO's early song, "10358 Overture.

I’d written before how my first concert was Tom Petty on the 1979 “Damn The Torpedos” tour with Joe Ely opening (cool), and how the first album I ever bought with my own money was Elton John’s “Goodbye Yellow Brick Road” in 1973 (also cool).

But I’ve never written about my driving affection for ELO’s music in the ‘70s (not what most would consider cool).

I still recall the eagerness I felt when I could get Mom or Dad to drive me to the old National Record Mart store the day “Face The Music,” “Eldorado,” “A New World Record,” and the great 1977 double album, “Out of the Blue,” came out.

It’s no exaggeration to say it was Lynne’s music soundtracking my ‘70s.

Musically, too, my tastes were changing. I was by then really into Petty, The Stones, Bruce Springsteen and The Kinks and more meat ‘n’ potatoes rock.

Happily for fans of great music, they were in many ways just beginning.

Some of the greatest minds in music were beginning to circle and the common orbit was around Lynne.

This is well-chronicled in the 2008 Peter Bogdanovich documentary on Petty’s career, “Runnin’ Down a Dream.”

George Harrison so admired Lynne’s work with ELO, he tabbed him to produce his   1987 comeback album, “Cloud 9,” a collection that included “When We Was Fab,” and “Got My Mind Set on You.”

This union formed the catalyst that became the Traveling Wilburys. It was during these recording sessions that Harrison remarked to Lynne that recording flaws would be diminished because “we’ll bury ‘em in the mix.”

According to Petty, he met Lynne at a Beverly Hills traffic light. He recognized him and rolled down the window to tell him how much he loved the Harrison album. Lynne followed Petty home for an impromptu jam session that eventually led to the collaboration that produced “Free Falling” and the epic “Full Moon Fever” album.

Unbeknownst to me at about the same time, the great Roy Orbison had tabbed Lynne to produce his comeback album, “Mystery Girl,” for which he co-wrote “You Got It.”

The two Wilbury albums remain some of the most tuneful hallmarks any bands have ever released.

I don’t think I began to fully appreciate Lynne’s ubiquitous impact until 1989 in a darkened movie theater when the credits for Mel Gibson’s “Lethal Weapon 2” began to roll.

That was the first time I heard the enduring catchiness of one of my favorite songs, Harrison’s “Cheer Down.” It’s a great, catchy song. Co-written by Harrison and Petty, it has producer Lynne’s fingerprints all over it.

Harrison, Paul McCartney and Ringo Starr coaxed him in 1994 to co-produce their “Anthology” series that featured the virtual Beatles reunion on the Lennon songs “Free As a Bird” and “Real Love.”

Still, I was skeptical when in 2001 when Lynne released “Zoom” under the ELO brand. The album earned rave reviews, but tanked, another indicator of record-buying tastelessness.

I remain hopeful he still has landmark music left in him and am eager to hear news of his producing interests. It seems he has the golden touch.

I wonder if he’d consider producing my blog.