Pro football's a bore; here are 5 ways to save it 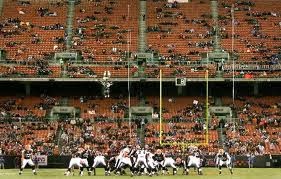 (1,106 words)
As the game clock ticked down to zero it was near midnight Sunday at frigid Heinz Field and about 46,000 fans began to feel satisfaction over a big Steeler win.

About 40 miles east and in a place that was about 60 degrees warmer I began feeling a different emotion.

As the Steelers were congratulating one another, I was congratulating myself for having the wisdom to have turned down multiple opportunities to attend the game.

In fact, as I switched off the TV and began plumping my pillow a surprising thought popped into my cranium: I’ll never attend another night professional football game for the rest of my life.

If true, that can only mean one thing:

The NFL has jumped the shark.

You can take it from me or any of the other 20,000 no shows who opted to eat their $86 tickets rather than attend. And if it’s happening with a fan base as dedicated as the one here in Pittsburgh, it’s happening everywhere.

Sunday’s game was the most poorly-attended in the 12-year history of Heinz Field. Many of the no shows were men and women like me. We believe watching the games about eight steps from our very own toilets is preferable to the vastly over-rated NFL experience.

But as I think it’s important to preserve something that’s been essential to American traditions, I’m offering these five suggestions as to how to save the game.

• Players get just one piece of protective equipment

It infuriates me when European rugby and soccer fans justifiably criticize or NFL behemoths for being over-protected. Why, they ask, should such big, tough men need so much body armor? Well, they’re right on the money.

In my NFL, players will only be allowed to choose to wear just one-piece of equipment. If they want a helmet, fine. Shoulder pads? Have at it. But you only get one or the other.

Injuries are ruining the game. Reducing equipment will make all but the true lunatic players more careful.

Plus, it’ll add a new element to bookmaking as fans get to place sporting wagers on on the over-under on how many players opt to wear goody protectors.

Specialization is ruining the game. Why does a team of alleged athletes need two men to kick the same ball?

Two-way players used to be the norm. It should today be the rule. Who among us wouldn’t like to see Tom Brady line up in the defensive back position? Or Ben Roethlisberger at linebacker? Or have Ndamukong Suh in the red zone backfield?

Injured players would be replaced by coaches, trainers or fit-looking beer vendors eager for a big-time break.

Over-officiating is killing the game. Seven on-field officials is the problem. There should be just two: one for the offensive side, one for the defense. That’s plenty to detect glaring infractions. Once that’s accomplished, players would need to be taught to self-police and adhere to the rules by the honor system -- like professional golfers!

So, say, if a player in an impulsive moment sticks out a leg and trips a rushing lineman, he immediately raises his hand and says, “My bad!” and play is stopped and the penalty assessed.

This would set a great example for America’s youth.

The great secret of the NFL is it’s really boring. That’s because in its arrogance, the NFL believes it can control time. So every 60-minute game takes about 3 hours and 20 minutes. And of that, only about 14 minutes involves the actual playing of football. The rest is a bunch of men standing around scratching themselves.

Or as George Will put it: “Football combines two of the worst things about America: it is violence punctuated by committee meetings.”

So watching the average game at home on your big screen is okay if you happen to be one of those people who really happens to enjoy hours and hours of beer, truck, and erectile dysfunction ads. But with all the TV timeouts and injury delays, the game is becoming impossibly tedious to view in person -- especially if you’re exposed to bitter elements.

Games should never last more than two hours. To accomplish this, the clock needs to run throughout play. This would bestow a frantic and compelling sense of urgency to every single second. Overrated coaches would become less necessary as players would have to rely on their own wits.

Timeouts would be increased from three per half to 15 -- and leftover timeouts could carry over to upcoming games, providing a tremendous advantage to teams adept at using the clock.

Each team would have to perform a five-minute skit, musical number or vaudeville (knife juggling, plate spinning, poodle training, etc.). Celebrity judges could be Simon Cowell, Mylie Cyrus and Dick Cheney. Depending on each team’s performance, judges could either add or deduct up to three points from each team’s total score.

This is another way of getting to know the players better and having them be better role models. Cowboy receiver Dez Bryant could shed his reputation for surliness if at halftime he came out and gave a poignant rendition of “Somewhere Over the Rainbow” with Tony Romo accompanying him on ukelele.

Promoting this has been a pet project of mine for three years. See, holding is the one penalty it is said referees could call on every play. But eliminating such an instinctual maneuver is impossible. Better to eliminate the offending limbs.

Our recent wars have left us with scores of tough, armless vets for whom patriotic fans would love to cheer. Armless lineman would make endemic holding a thing of the past.

So there you have it, five thoughtful solutions to chronic NFL problems.

I ask that you share them with friends, craft your own and join me in my mission to help save a game that is dying before our very eyes.

It’s a mission I intend to get back to as soon as I figure out a way an armless NFL lineman will ever be able to bend over and snap a football.

Am I ready for some football? Nope