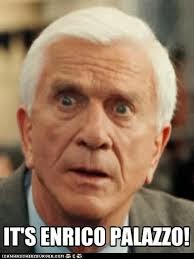 (673 words)
I'd like to see a picture of a deaf delegation at the Mandela funeral all simultaneously scratching their heads, which I guess is sign language for, “WTF?”

The episode makes me wish I was young and feckless enough to go to loud dance clubs where I predict some version of Thamsanqa Jantjie’s fluid yet robotic moves will sweep the nation.

To me, it’s the greatest impostor performance since Lt. Frank Drebin of “Police Squad!” pretended to be both a Major League Baseball umpire and opera tenor Enrico Palazzo during the Los Angeles Dodgers game where Reggie Jackson tried to assassinate Queen Elizabeth.

So an addled man with a history of violence spends an hour on stage 36 inches from the leader of the free world and infuriates the global deaf community by signing incomprehensible gibberish.

And they call that news.

And, yes, that’s an even more obscure “Naked Gun” reference. There’s just something about the whole kerfuffle that reminds me of classic screwball comedy.

As a adult who’s for more than 20 years has pretended to be a wage-earning journalist, I find much to admire about Jantjie’s performance. When I first learned of the alleged deception, I wondered if he did it on a dare.

Or maybe the real interpreter got bumped unconscious and one of the funeral organizers -- and let’s not forget this was at a funeral (a funeral!) -- ran in and said, “Quick, we need someone who knows sign language! Can anyone help us?”

Maybe Jantjie slugged down a shot of courage, stood up and said, “I’m your guy!” To emphasize his point, he maybe made Hercules arms and pounded on his chest the way I do when I want to signal competence.

To those of us who are ignorant of sign language, he looked perfectly expert.

Of course, what the hell do I know? To me all sign language looks similar to what I see Pittsburgh Pirate third base coach Nick Leyva doing moments before Andrew McCutcheon tries to steal second.

In fact, modern sign language is an art that’s been around for more than 400 years and involves nearly as many dialects as spoken communication. Effective signers augment their motions with expressive facial and spoken recitations to assist interpretation, a telltale oversight by the impostor.

For all his wild gesticulating, he appeared as facially stoic as a man waiting for a bus.

Of course, Jantjie is sticking to his guns. He’s maintaining he is a bona fide sign interpreter.

That’s just one of the things he’s said. He’s also said he’s schizophrenic, that his medications were off, and that encouraging angels directed him to sign divine.

I’m hoping to hear him say he was protecting Obama from a swarm of invisible bees.

In any case, all his excuses are falling on, well, deaf ears, and that makes it maybe the first time in history that phrase wasn’t excessively metaphorical.

We’ll probably never know the answers to how this all happened and what motivated Jantjie, but there’s Biblical precedent to the chicanery.

The Book of Genesis describes how descendants of Noah built the tower of Babel in the hopes it would reach heaven and they could better communicate with God, which supposes a certain Almighty deafness to people who pray on their knees.

The scriptures say God prevented them from completing the tower by confusing their languages so they could no longer understand each other, thus forever dooming mankind to an inability to sensibly communicate.

Is it just me or does anyone else thinks that’s the kind of stunt you’d expect from Satan, not God?

Anyhoo, the Bible also tells us man is made in God’s image, which logically means He has hands with one thumb and four fingers, one of them being middle one.

Something tells me modern sign language is a lot older than 400 years.

It’s maybe the one sign even that now-famous funeral fraud knows.