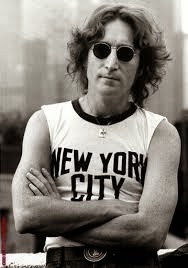 It was 43 years ago today that John Lennon was killed. Here’s the 2010 story I wrote about his death and the two great songs it inspired.

An old friend of mine used to keep a list of people who should have been shot instead of John Lennon. It was a very long list and he tended it with a maniacal fervor.

Of course, there were men like Kim Jung Il, Idi Amin, the since decapitated Saddam Hussein and other tyrants bedeviling the planet about 25 years ago.

But there were also numerous garden variety miscreants who, I felt, certainly didn’t deserve ballistic ventilation. I remember his list included one wobbly NFL kicker for the Detroit Lions whose scattergun field goals had cost my friend a small fortune in ill-considered wagers.

It’s wrong, of course, to talk about the need for more gun violence on a day so marred by tragic gun violence, but I always think about him and his list on December 8.

I was too young to be moved by the grief tsunami that swept across the country 30 years ago this evening.

Of the Beatles, he’s probably only my third favorite behind Paul and George, which is like finishing last since who cares about Ringo (in fact, I think Ringo was on my friend’s list).

My favorite solo song of his is “Watching the Wheels,” but the rest move me very little. And I maintain all the best and most tuneful Beatle songs were Paul’s creations (“Hey Jude,” “Penny Lane,” “Yesterday,” “She’s Leaving Home,” “Eleanor Rigby”).

And then there’s the whole Yoko Ono thing. We have, as a nation, watched her for more than 40 years and no one has yet to figure out what he saw in her.

Lennon’s hailed for his devotional fatherhood to Sean, but no one ever mentions how he abandoned his first family and never paid a minute’s worth attention to his first son, Julian, who released a fine album I recall from about 1985, and seems to have grown up normal despite John’s cold absence.

His contributions were incomplete. It was Lennon I thought of after Paul’s recent diss of George Bush. McCartney praised Obama and hinted it was great we had a president who knew how to read.

My first thought was, “You guys ought to be glad some one shot John Lennon. I wish he’d been around as we were ramping up to fight this goddamn ridiculous Iraq war. Man, he’d have been raising holy hell.”

We lost so much when we lost him -- and the music wasn’t the half of it.

That’s what I lament about his death. We lost an agitating jester.

I never let this day pass without playing the two great songs written to commemorate his death and life. They are monumental works and I still struggle to get through them without wiping tears.

The first is “Empty Garden (Hey Hey Johnny),” written by Bernie Taupin and Elton John, who was one of Lennon’s best friends and with whom he made his last concert appearance..

It’s a fascinating friendship. Elton bet Lennon that if his version of “Lucy in the Sky with Diamonds” went No. 1, Lennon would have to perform at Madison Square Garden with him. It did and their lively version of, ironically, Paul’s song, “I Saw Her Standing There” is Lennon’s last live performance.

Elton performed “Empty Garden” once and couldn’t make it through. Propelled by a heartbeat rhythm, the song is so plaintive, so heart wrenching, it combines rage and grief to create something beautiful. He’s never played it again.

The other is “All Those Years Ago” by George Harrison. It’s the flip side of the Elton song.

It’s a bouncy delight about the joy he knew by being friends with John when it was just the four of them bouncing around in the van as it rolls across the English countryside. It’s the side of John Lennon even Yoko never knew.

How he wrote a song this beautiful, this euphoric, about something that had to be so devastating to him leads me to believe angels exist and they love to dance.

Here’s a short list of other worthy songs inspired by dead celebrities:
Imagine the fun.