Love is in the air! McCutchen, Maria & Me 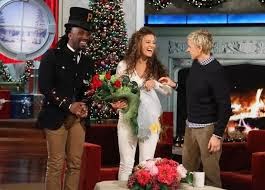 One of the things I like about the game of baseball is that it’s forever teaching me lessons about character.

Being a fan of the Pittsburgh Pirates has taught me things like patience, optimism and value.

Patience because the team went 21 years between winning seasons, optimism because I knew one day even that streak of haplessness had to end, and value because over the years I’ve come to understand how little of it there is in an $8.25 glass of warm ballpark beer.

And last week America’s greatest pastime surprised me with a revelation that caught me off guard.

Baseball taught me I’m one of western Pennsylvania’s greatest romantics.

MVP all-star centerfielder Andrew McCutchen proposed to girlfriend Maria Hanslovan on the Ellen DeGeneres show and many of my baseball friends thought it was deplorably cheesy.

Me, I thought it was nifty. Sweet. Heart-warming. Adorable. Enchanting. Delightful.

Shucks, it was cuter than puppies on pillows.

It’s clear McCutchen is head over heels in love with the winsome Maria.

And why not? She’s beautiful. She has a playful smile. Her @MariaHaslovan account includes a tweet advising that “Farting helps reduce high blood pressure and is good for your health!”

A pretty gal who appreciates the gastrointestinal benefits of a good, long stinker?

She’s from DuBois, too. My late (and beloved) grandfather ran the high school cafeteria there. Go Beavers! And that’s the school’s actual nickname and not me just being dirty, so consider it a two-fer.

And I am tickled there are fairytale elements to the romance. The pair met at the ballpark when she was part of the Cannonball Crew, the team of fetching young lovelies that fire up the crowd by shooting Bucco t-shirts and hot dogs at the fans between innings.

So there’s a chance before she began dating McCutchen she’d fired one of her weenies right at my heart.

Alas, it was not meant to be.

In fact, I might love him more than she does.

She’s 25 so she’s probably only cared about boys for 10 years. She probably dreamed of a guy who’s handsome, caring, gentle, funny and a good provider. A beauty as fair and fart-loving as Hanslovan could find hundreds of eligible men.

Me, I’ve been waiting for a guy like McCutchen since 1992.

I’d sit there night after night alone in my basement and in mind scrapbook my dream Buc.

He’d hit for power with runners in scoring position, he could bang off speed junk to the opposite field, he’d be fleet footed enough to cover wide swaths of PNC outfield and he’d have a cannon for an arm.

McCutchen’s all that and more.

See, I’m like Maria in that I want my dream Buc to be funny and caring, too.

We’ve had great baseball players here before, but it robs fans like me of some of the joy of rooting for them when they’re surly jerks.

And that description fit Barry Bonds to a T.

The Bucs won a lot of games with Bonds -- not many meaningful October ones -- but a lot of games against teams like the old Expos in months like April.

McCutchen is an absolute joy to watch. He plays with an infectious enthusiasm that fires up the whole ballpark. He’s always clowning and cutting up in the dugout and I understand he’s a devastating mimic.

The greatest quote I’ve ever heard about him was from his manager, Clint Hurdle, who said, “He’s one of two guys I’ve coached in my life that I wanted to both date my daughter and bat third.”

We’re talking about two people who were meant to be together, who will now eagerly engage a future that holds so much special promise.

It’s a match made in heaven.

I’m talking, of course, about me and Andrew.

If she’s marrying McCutchen, she’s going to have to understand guys like me are all part of the package.

I’m sure she’ll be fine with that.

Any girl who admires a really good, healthy fart is gonna love me.

Time for Bucs to bury the great Vince Lasheid
Posted by Chris Rodell at 11:45 AM