Bravo! Our night at the symphony 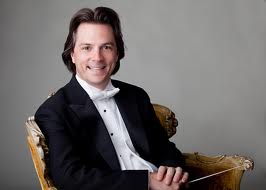 (667 words)
My wife prepared me for a night at the symphony by assuring me I’d be enthralled with the conductor.

She was correct. Daniel Meyer, artistic director of the Westmoreland Symphony Orchestra, is all that and more.

Heck, his hair alone was magnificent and charismatic. It struts. It shimmies. It cavorts. It moves like it is being told what to do by some demanding unseen conductor determined to wring every last bit of performance out of each sweeping hair.

A friend of ours had given us four free tickets to the Greensburg symphony’s performance of “Around the World with Disney” program. The concert features symphonic recitations of music from “Beauty and the Beast,” “The Lion King,” “Mary Poppins,” and other tuneful Disney classics.

It was thoroughly enjoyable, although my wife kept asking me what she should do to keep the 6-year-old from getting bored. She got mad when I kept suggesting she just give Lucy a straw, a piece of paper and just let the spitballs fly, as sure a cure for boredom as there’s ever been.

Symphonies have a difficult time maintaining the visual attention of those of us who’ve seen Tommy Lee play the Motley Crue drums upside down.

That’s why the highly-regarded Meyer is such a compelling asset. He has conducted all over the world and is to be applauded for his musical outreach to youth with programs like the one we enjoyed Saturday.

He truly is a great performer in a discipline few of us understand. He has his back to us the entire show and must know that many uncouth louts like myself are sneering about how we could do that.

Understand, we couldn’t accurately ring -- ding! ding! ding! -- the little silver triangle on cue, yet we believe we could conduct the entire orchestra.

Conductors are the rock stars of classical music, an analogy that must make legendary maestros like Herbert von Karajan cringe at being lumped in with the likes of, well, Tommy Lee of Motley Crue.

Yet, conducting a symphony is the most satirized role in all of music. “Seinfeld” did it with “The Maestro” episode. Bugs Bunny raised the baton several times and consider yourself lucky if you recall any of the late Victor Borge’s hilarious performances.

As it was explained to me, the conductor’s job is the most important in the entire orchestra, even though he doesn’t play a single note.

The paradox is no one playing instruments ever seems to look up at him for even a single beat, as all their eyes are glued to their sheet music. Yet, I couldn’t take my eyes off of him.

He was a tornado of metronomic commotion. Baton flying, he had an air of such supreme poise and confidence I don’t think any of us would have noticed if with his left hand he’d taken out a smart phone and deftly texted a buddy about the score of the Pirate game.

That kind of stage presence takes a lot of brass. Meyer had that in spades, not to mention in tubas, trumpets, French horns and trombones.

I counted 45 musicians on stage, just a shade under the number on the 53-man roster of a professional football team.

The coincidence gave me insight into the value of a conductor.

The analogy stuck with me the rest of the evening.

I had a wonderful time and always thrill any chance I get to see fellow humans who’ve practices long and hard excel at their art. It’s something I hope our children learn to appreciate.

We stayed for the whole thing.

I wouldn’t have had it any other way.

I wanted to see if the evening would end with two of the big guys from percussion rushing up and dumping a big bucket of Gatorade over the Meyer’s head.

I accidentally viewed your blog and I was so amazed with your work that it touched the deepness of my heart and it made me sentimental. Thanks for posting. Visit my site to buy fake rolex