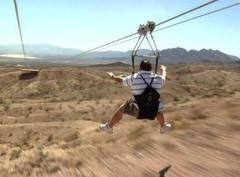 (644 words)
I can envision a future where our dominant means of city conveyance is the zipline. It’s perfectly green and pleasant and combines elements of speed, fun and fitness.

What saved me was my ability to recall instructions constructed like nursery rhymes: “When in doubt, legs out.”

It’s why I never in my life returned a tape to the old video stores with the tape positioned at the film’s end.

Yes, in terms of raw impact, succinctness and message mission, history’s greatest poem may be “Be Kind, Rewind.” Even Shakespeare can’t touch it.

So that bit about spreading my legs to pornographic angles likely saved me from suffering a painful blow in a place no man wants to get painfully blown.

Be sure to apply the brakes when approaching the line terminus at 40 mph.

We were enjoying the FlightLinez Bootleg Canyon complex. It has four distinct runs that cover just over 1.5 miles of the Mojave Desert outside of Boulder City. You can see Lake Mead and the new Hoover Dam bridge off in the distance.

The $150, two-hour experience is billed as eco-tourism and involves lots of scenic hiking. So you’re feeling exhilarated when you come to the first station near the 3,800-foot summit of Red Mountain. The views are magnificent.

By this point in the trip, I’d vanquished every trifling fear I’d had involving adventure activities and I was swaggering.

Well, swaggering as much as any grown man can when he finds himself dangling like a really big baby in his diaper-like cradle.

The ziplines work purely on gravity, which is why some weight restrictions apply; weigh less than 75 pounds and you might not have the mass to make it all the way, more than 250 and you risk wrecking the operation.

FlightLinez even has a nifty promotion to encourage overweight people to comply: Send them a picture of yourself holding a dated newspaper and they’ll discount you $1 for every pound you lose. The deciding scale’s in the HQ.

“We’ve had some big dudes,” our guide said, “strip down to near nothing just to make that magic number.”

I guess all the views can’t be magnificent.

Ziplining is the one activity from last week my wife said she’d like to try and I hope we get the opportunity soon. It’s thrilling without being scary.

They release the station brake and you go zipping down the mountain plunging 450 feet in 15 seconds, reaching speeds of close to 70 mph. Absent is the distress of a roller coaster. It’s serene and peaceful -- right up until you realize you have to intervene the speed.

This was my problem.

Because the only other thing I remember them saying was you don’t want to be too aggressive with the brakes lest you stop short of the station and need rescuing on what they called “the pull of shame.”

I remember the station master furiously waving his day-glo red warning flags in what I later learned was the signal indicating, idiot, you need to brake. Now!

Seeking to avoid the pull of shame, I barely braked at all and went flying into the line’s safety backstops at about 30 mph. All I did was remember, “When in doubt, legs out.”

It would be really cool to view the impact in slow motion to gauge just how close my nuts came to getting crushed.

But I was fine. In fact, it was a blast. Very invigorating.

After that, all the guides kept calling me Ricky Bobby.

I’m glad I didn’t get my balls smashed.

The resulting first aid might have led someone to nickname me Zipper.