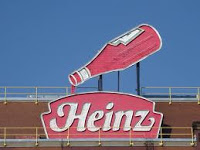 Recent news that Warren Buffett purchased Heinz foods led to a little burst of activity for this October 2011 post about the day we watched Dave, The Pond bar owner, mate two compatible bottles of Heinz 57. I thought I'd re-run it today in case anyone woke up groggy this morning from recollections of ketchup sex, in fact, one of the search terms that led one curious reader to this one.

So I had this news clip on my desk for about the last three months. I’d pick it up and look at it again and again. It seemed too trivial to indulge with a full post, yet too fascinating to dispense with a tweet.

But I can’t shake its import. I must share. So here goes:

Email ThisBlogThis!Share to TwitterShare to FacebookShare to Pinterest
Labels: Drew Carey, getting all the ketchup out of the bottle, Heinz 57, Ketchup Ketchdown, ketchup sex, mating ketchup bottles, The Pond