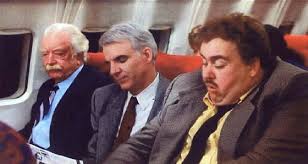 (694 words)
We were camped at 5 p.m. outside Gate 32 at the Orlando International Airport. Every 15 minutes a Spirit Airline employee would say our 2:55 flight back to Latrobe would be delayed another 15 minutes.

That meant every minute after that some jerk in an obnoxious shirt would loudly announce he’d just Tweeted to his 1,200 followers to never fly Spirit Airlines again.

Shame on you if you think I’m talking about myself.

My Tommy Bahama shirts are perfectly tasteful, I don’t shout my opinions to airport strangers and, geez, I only have 202 followers.

That last part confounds me.

Is our Twitter society so moronic it would rather follow a goofball who Tweets “#SPIRIT SUCKs!” or me, a guy who last week tweeted this @8Days2Amish gem:

“Loud bulimics make the worst neighbors. They can never keep it down.”

Here’s what I’d have tweet/shouted if I felt compelled to share my opinions of our plight:

“Those of us who enjoy reading don’t care if the plane’s a little late. Lighten the f*&#$ up!”

Of course, part of my reaction may have been that I’m an uncomfortable flier with plenty of time on my hands.

I’d have been relieved if they’d have announced, “Look, we’ve all decided flying is a preposterous way to transport human beings so we’re canceling this flight and will instead issue you all free Amtrak tickets along with vouchers for a bag of pretzels and one free domestic beer.”

If they make flying more comfortable, more of us would fly more often. Instead, flying is so stressful most of us go to great lengths to avoid it.

This was my fourth flight in the past month. I was nervous about the first one because I feared a recurrence of past claustrophobia issues.

Turns out that problem has vanished. Of my four flights, three of them were in the middle seat and I felt no queasy anxiety or urge to run up and down the aisles screaming, “Mommy! Mommy!” which FAA regulations strictly forbid.

So when we finally boarded two-and-a-half hours late, I was far from the most uncomfortable passenger on the plane.

Turns out that guy was in my seat.

His name was Mitch and he lives in nearby Indiana, Pa. He’d made himself at home in my aisle seat directly across from the three seats occupied by my family.

Armed with the proper ticket and righteous privilege, I sort of said, hey, pal, you’re in my seat. Scoot over.

“Would you mind sitting in the middle seat?” he asked plaintively. “I’m very uncomfortable about flying.”

So I look at him and I see myself. He was in his 40s, had the flop sweat on the brow and looked like was on the verge of begging. He was miserable.

I’ve been there. I knew exactly what the man was going through.

So how on earth could I say no? I couldn’t.

I climbed into the middle seat I’d spent the last eight weeks or so dreading. I was feeling none of his obvious tensions.

Plus, it gave me the opportunity to play therapist to a fellow sufferer. I sympathized, consoled and shared with him the aforementioned Grizzard tip. I got to be a lowercase hero to a struggling stranger.

I felt especially proud that I didn’t use my act of humanity as a sales pitch to buy “Use All The Crayons!”  which I felt would have tainted my kindness.

Spirit chose to compensate us each with $50 vouchers for our next flight, so I assume that jerk lied to his 1,200 Twitter followers. He’ll fly them again soon, I’m sure.

Want to know what I tweeted after all this? After the delay? After my gesture?

“The romantic in me still sometimes wonders if Barnacle Bill the Sailor ever found true love.”

• Return of the panic attacks

• Plane truths from a real road warrior
Posted by Chris Rodell at 11:25 AM