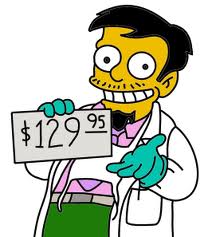 I don’t know what UPMC would charge to cure boiling blood, but I’m sure it would be expensive.

It takes a lot of money to fund CEO Jeffrey Romoff’s life as the head of the gargantuan non-profit, a “non-profit” that last year posted $5.7 billion in net patient revenue.

A suit filed last week says Romoff makes $6 million a year and conducts his business in what’s been described as Pittsburgh’s most expensive office. The suit says he has “a private chef and dining room, a chauffeur and a private jet.”

The part about the chauffeur and the private jet confused me. Does the chauffeur fly the jet? There’s a certain structural agreement to having a private chef and a dining room.

Anything smart about the medical industry would seem to be at odds with all we know about how they do business.

We all know fraud and waste are at the heart of our medical health care costs. I think I remember seeing hospitals bill patients something like $12 for a single Q-tip.

Side note: I’m about to embark on a campaign to eliminate the nonsensical word insane from our vocabularies. Insane implies being within the realm of sane. Clearly, the word should be outsane. The difference is making me crazy.

So where do we go with all this? These stories aren’t anything new.

We need to uproot the entitlement mentality that infects the people to whom we go to cure us.

How do we do that?

We begin by reducing the average annual doctor salary of all new med school grads from $200,000 to $75,000. And we cap it at that for 20 years. Those who agree to this stipulation will have their student loans federally subsidized through eventual savings.

And $75,000 is nothing to sneeze at -- even for doctors who specialize in treating allergies. It’s $25,000 more than the national average, or about what top golf instructors earn each year to cure slices, hooks, yips and other swing things that trouble most men more than their morbid obesity.

Too many men and women get into medicine because they see it as an avenue to wealth. They see doctors’ Cadillacs filling up the country club parking lots, their boats in the pricey harbor yacht slips and their pampered behinds in the cushioned seats in the luxury boxes at the Steeler games.

The lifestyle sends a powerful message to college students who are motivated solely by material gain -- and I trust those docs less than the ones who admit to pursuing a medical career for free drugs distributed by cheerleader pharmaceutical reps.

Removing the financial incentive would attract people who are motivated to get into the healing business based on the novel idea of wanting to make sick people well.

One of my favorite stories of all-time was one about a doctor in Amish country who used to accept live chickens for payment. The only thing that prevented it from being my very favorite story was I couldn’t get him to say he’d give eggs for change.

I asked him why he ran his private practice in a way that ran so counter to corporate mindsets.

“It’s because I put helping people above profiting from them,” he said.

He didn’t care what he earned as long as his wife knew how to cook a tasty chicken.

We need people like that in every profession, especially the ones that are all about helping people.

To think there are so many in the medical profession who think otherwise makes me sick.

Maybe that’s all part of the plan.

They behave in ways that sicken us so they can continue to charge exorbitant and fraudulent fees for cures that forever elude.