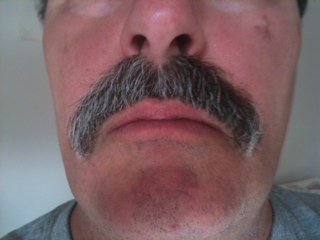 (719 words)
The barber was concluding my trim when he asked a question no barber’d ever asked me before.

“Do you want me to groom your eyebrows?”

“Why would I want you to do that?”

“So people will be able to distinguish you from common barn animals. You’re starting to sprout strays.”

I hadn’t noticed. I’m so busy cataloguing hairs that are no longer there that I hadn’t detected that my eyebrows seemed to be going through unusual growth spurts, a sort of eyebrow puberty.

I told him to leave them alone.

I’m on to barbers. I know it’s in their self-interest to advise every man with hair that he’ll be more attractive with only a thin fringe up top. Beards? Sure, but nothing scraggly.

Keeping each and every hair short and precise ensures more frequent visits.

It’s part of the code, I guess, and the reason why no one’s ever seen a shaggy barber.

It’s now my goal to grow eyebrows so thick and luxurious that downpours and noon sunshine will be unable to penetrate the canopy.

It’ll save me a fortune on hats, shades and sunscreen.

Why I care even a whit about my facial hair is a mystery even to me.

No one else cares. Certainly not my family.

I shaved off my winter beard on Sunday. For years, I’ve begun growing a beard on Halloween and regardless of the forecast shaving it on St. Patrick’s Day. I began doing this routine because I figured it would be fun for our daughters.

I could be their own personal Groundhog Phil. When they’d see my chin free of whiskers, they’d know Spring was just around the corner.

So here’s what happened this year: Nothing.

No one noticed the first day. Or the second. Or the third!

Finally, it dawned on our 6-year-old that a handy tool she used to inflict random pain was missing from my face. She enjoyed giving the beard a quick, cruel yank anytime she’d catch me foolishly dozing in the big easy chair.

Once, just to test the powers of their observation, I shaved the right side of my mustache and the left of my beard and sat through dinner without anyone noticing (you can see a picture at this post).

Finally, I instigated a tickle fest with the little one who was 3 at the time. I got right in her face until she stopped laughing long enough to observe, “Someone took Daddy’s mustache.”

In fact, I’ll die before I let anyone take my mustache.

I’ve spent more time caring for and nurturing it than I have either of our daughters. It’s my first born. Plus, unlike the children, it’s never sassed me or say I embarrass it in front of its mustache friends.

Why would it? My mustache knows I have its back.

These are exciting times for me and my mustache. One of my most distinguishing characteristics is that the right side of my ‘stache is dark, while the left is mostly white.

Many men have what are commonly called salt and pepper mustaches.

I do, too, but my shakers are on opposite sides of the table.

It’s an odd ebony and ivory thing right beneath my nose and I’m eager for pepper to give way to salt. I believe it’ll make me look more distinguished.

Right now I look like one of those vain asses who dyes his mustache, but can’t commit to dying both sides. I guess that means I look half-assed.

What’s ironic is I’m devoting all this attention to my facial hair while the rest of my head hair is succumbing to male pattern baldness.

It’s like an old prison movie where a few flunkies distract the hacks so the gang in Cell Block C can escape over the wall while no one’s looking.

I became aware of this last November when I was in Gettysburg with Josie. It was marvelous bonding time. A friend of ours later sent me a picture that showed Josie from behind with some guy I initially thought was some balding stranger.

Livid, I called the photog and demanded he identify the chrome dome with his arm around my daughter.

Think anyone can persuade me to reveal the sad punchline to this story?

Not by the now shorn hairs on my chinny chin chin.

• Movember & my magnificent mustache
Posted by Chris Rodell at 11:48 AM