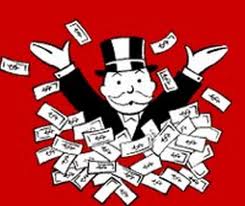 (814 words)
“Use All The Crayons!” Tip no. 122:   Extravagantly overtip friendly, underpaid waitresses who often spend long days and nights away from small children to bring you a hot meal. At night when they go home and are soaking their aching feet, they say prayers asking God to bless people like you.

I’ve been doing this for years. If the breakfast costs $10, I’ll often leave a $5 and never less than the standard 20 percent.

I honestly don’t know if those waitresses go home and say prayers on my behalf or head straight to the mini-mart to buy cigarettes and lottery tickets.

But I know I am blessed.

Let’s for now set aside the stuff about family, health, friends and Mario Lemieux owning the Pittsburgh Penguins and get straight to all the free shit.

Just last week we had 24 hours at The Breakers in Palm Beach. It’s fabulous.

It confuses me and flabbergasts the hell out of my family, but there are many travel industry professionals who regard having me as their guest as good for business.

In return, they expect me to write nice things about their venues in the hopes that my words are influential enough to lure more tourists through their landscaped gates.

I know this: I did nothing to diminish that reputation during my stay at The Breakers. I practically rained cash on the smiling staff.

I think it made them feel good. I know it did me.

I believe I have a karmic obligation to be an excessive tipper any time anyone bestows me with surprising kindness.

Tipping the bellman a buck a bag is standard, as is a buck or two for anyone who holds the door for me without saying anything insulting about my tacky shirt. Five bucks for room service.

I dropped an extra $20 on Marlin, our Jamaican waiter, for sentimental reasons. The Breakers has a family Italian Restaurant that is near a supervised resort game room.

Marlin kept sliding the kids tokens from his stash, giving Val and I enough time to look soulfully into one another’s eyes and say, “And what did you say your name was again?”

And he was great. We had him sign and date the wine cork and it’s now in a basket with the others we take out to look at whenever we want to remember special meals.

As we got up to leave, he assured me our hosts had already taken of him and I was under no further obligation. But I slid him an extra $20.

Looking back, I should have doubled that. He’d helped give us a special night and all I did was give him a twenty. Understanding you can never tip too much, I now realize I was a bit stingy.

I did a little better with our bungalow butler.

Having never heard of bungalow butlers, I figured I’d go my whole life without ever needing to tip one.

The Breakers changed that perception by giving us day use of one of their beach side bungalows. It features open-air private showers, food and drink amenities, and Crystal.

About 20 or so, she smilingly saw to our every need. She was great with the girls and made us feel right at home. We were there from 11 a.m. to 6 p.m., seven magical hours.

So what do you tip a bungalow butler?

I had no idea. I decided to ask around. I asked the kid at the host station. He had no idea. He furrowed his brow for a bit and then like an unsure contestant on “The Price is Right” took a wild guess and said, “Gee . . . $40?”

Then I went and asked the people who know everything: The Breakers concierges.

I tried to think of why I, an often impoverished man of meager means, am so adamant about tipping. I think it goes back to one afternoon at Jack’s Bar on Pittsburgh’s South Side.

I remember ordering two $2 beers and handing out a $10. Despite being swamped, I remember the bartender being friendly and smiling, looking like there’s no where else she’d rather be.

I told her to keep the change.

I’m sure she doesn’t remember me or that tip, but I’ll never forget how good I felt walking away from the bar after her cheerful declaration.

She was right. At least when it comes to tipping, I am awesome.

Email ThisBlogThis!Share to TwitterShare to FacebookShare to Pinterest
Labels: Breakers Beach Bungalows, Mario Lemieux, overtip everyone, The Breakers, The Price is Right, tips on tipping, Use All The Crayons

May you prosper forever so you can continue to tip so generously and make even more people happy. May I serve your next lunch?

Well, aren't you sweet. It'll be my pleasure to have you wait on me, Sharon, although I'd prefer you simply join me. Either way, you get $50 for your flattery!