Our secret week in Florida 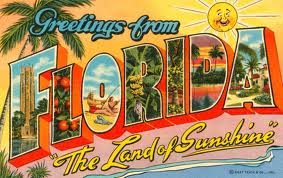 (930 words)
I mistakenly thought I knew what was going to happen next after my wife lectured our 12-year-old about not posting anything on Facebook while we were away last week in sunny Florida.

She told her if she posts a picture of herself at the beach or with Mickey Mouse,  some lowlife would see we were away and break into our empty house and rob us.

Here’s what I thought she’d say to me:

“And you, my darling, do NOT write a word about this on your blog. I know given the vast reach of your readership it would certainly lead to criminal mischief.”

How much of this did she say? Not a word.

The tip-off should have been when I began her made-up harangue with her addressing me as “darling.”

So I spent the whole week criss-crossing Florida silently wondering if the criminal element of our 6th grader’s Facebook friends exceeds the number of crooks who read my blog.

Either way, the demographic comparison dismays.

Val’s failure to address me and this blog led to the immediate understanding she was engaging in spouse-speak. That’s where you say something aloud to your children hoping your numbskulled husband will get the real message.

Either way, there was no way after that I was going to blog about our trip, and that’s disappointing because it’s been a topical week.

Other than our love for his daughter, we have absolutely nothing in common.

It’s a source of frequent friction between Val and I so I could have spent the entire two days blogging about his miserly idiosyncrasies if he’d have only obliged me all that extra electricity.

So the best thing to come out of our two days with him was that Josie coined the subversive name for staying someplace where punishing cheapness reigns.

Just another night at The Grande Pa.

We went from there to Palm Beach where we enjoyed the antithesis of cheap. Yes, it was a night at The Breakers.

It was the most sumptuous 24 hours of my entire life, and I’m not saying that because we’d just departed The Grande Pa. If we’d have stayed another day they’d have had to summon the sheriff to evict us.

From there it was two nights with four three-day park-hopper passes at Disney World. This was the reason for the whole trip.

We hadn’t even told the girls we were going on vacation until two days before we yanked them out of school and we didn’t confirm Disney was part of the plans until we were within sight of the front gates.

I can’t predict what tumult the teenage years will hold, but if these two precious darlings remember even a fraction of the fun they had during the past seven days the recollections will soften some of the turbulence.

This was a week of memorable family happiness.

Didn’t end at Disney either.

One of my old buddies is a big shot at The Peabody Hotel in Orlando. That’s the one where they make a big deal out of the ducks in the hotel lobby fountain. He got us a great deal there for one night.

After all that, the girls were underwhelmed to learn we were concluding our vacation with a night at a rustic Lake Wales area-cattle ranch.

Disney calls itself The Happiest Place on Earth.

Anyone who’s lucky enough to be friends with anyone in the Armington family might dispute that.

I’ve had some of the happiest times of my life at the Armington Ranch with my buddy George and his brothers. Happened again Sunday with George, Bob and his wife Diane.

And the whole time I’m having all this fun, I’m thinking, man, I wish I could spend an hour each morning sharing these adventures with the law-abiding citizens who read my blog.

But there’s no way I could do that, not after Val’s subtle message.

It would have been one of the all-time I-told-you-so’s if we’d have come home to a ransacked house with Val and I standing in a barren living room and her saying, “You just had to write about our trip to Florida on your stupid blog, didn’t you?”

So unless there’s a groundswell of readers who rise up dying to know my thoughts on sequestration, I’m going to spend the next few days blogging about our jolly traipse across The Sunshine State.

And here’s what I’m going to do next time we go away: I’m going to post right here the times we’re leaving and inform the world all the doors are unlocked and the fridges full of beer and lunchmeat.

See, this blog welcomes both crooks and saints.

I just want the crooks to know that they’re outnumbered by the saints and that the saints are welcome to house sit while we’re gone.

Regular readers already know we are of meager means.

The only precious things in the house when the precious people are not are the photo albums and things too personal to even afford a desperate Lindsay Lohan a cheap night at The Grande Pa.