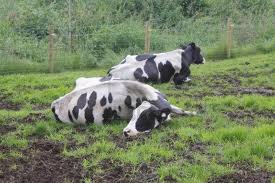 Welcome to Day 1 of our great national hangover. Yes, it's time to set the clocks ahead and stumble zombie-like through the day. I wrote this one last year on DST. Still applies. Try and take a nap today. Or two.

It may come as a surprise to sophisticated readers, but the inspirational soundtrack for these posts is often the morning farm report.

I rise with the roosters and am on the road by 6 a.m. most mornings, my radio set to Latrobe WCNS-AM.

As the local agriculture reporter drones on about the price of soy, winter wheat and dairy futures, I drive half asleep past about a dozen chickens, four cows and a black and white goat my daughters tell me is named Oreo, famed among the school bus set for once having escaped by chewing a hole in his fence.

The farm report and the bucolic scenery seem to further soften my still-foggy mind so the first lively newspaper story I see jumpstarts my thinking so I can wax euphoric over things like mimes and Earth’s eventual occupation of Kepler 22b.

Today I’d like to issue a little farm report of my own.

The cows look relaxed, the chickens serene and Oreo fit as a fence-chewing fiddle.

And I feel like I was out drinking all night and got all of the headache and none of the fun.

I’ve had my share of killer hangovers, but those I’ve suffered in solitary.

Turns out Daylight Savings Time is killing us all.

A University of Alabama at Birmingham news release said the Monday and Tuesday after moving the clocks ahead are associated with a 10 percent increase in the risk of heart attack.

It’s a common vanity for men and women to boast they have some time to kill.

The exact opposite is true in October when we move the clocks back: Risk decreases by 10 percent.

It’s only logical to conclude if we move the clocks back an hour once a month we could eliminate killer heart attacks all together.

I don’t understand the need to monkey around with time so much.

I have enough trouble sleeping. I lay awake worrying about money, my fathering deficiencies, Sidney Crosby’s return from concussion symptoms, international conflicts and irrational tyrants bent on attaining the WMD that experts say will nudge the world ever-closer to nuclear doom.

And now I have to worry about artificial time manipulations increasing my risk of deadly heart attack.

Then there’s the tedious logistics of it all. My computer and phone both automatically reset, but my three watches, my Bose stereo, car radio and two battery operated clocks require pesky manual adjustments.

Changing clocks takes time. And every second spent tinkering with the hands of time is another second spent dreading the unhealthy consequences.

And, really, big picture, I fret over what DST does to the Doomsday Clock. Artificially operating since 1947, it was intended to herald the threat to humanity from nuclear catastrophe, but has since upped the gloom quotient by adding the threat from climate change.

Could a careless re-setting of the Doomsday Clock render all my cares and worries moot?

I’m too sleep deprived to calculate the possibilities.

I do know this much: I’ve never once heard my morning farm report announce there’s a strange outbreak of bovine insomnia striking the region.

And until you start seeing cows with wristwatches strapped to their left front legs, I doubt you’re going to find a cow that has trouble sleeping.

They go through life untroubled by our vanities regarding time and the pretense of our ability to control it -- right up until the kind-hearted farmer packs them off to the slaughter house.

And now I’m doomed to spend at least part of the day wondering if the Doomsday Clock has a snooze alarm. Holocaust or not, I’m still going to need my beauty sleep.

But that’s a matter to be resolved another day.

Right now I just don’t have the time.
Posted by Chris Rodell at 8:46 AM

I accidentally viewed your blog and I was so amazed with your work that it touched the deepness of my heart and it made me sentimental. Thanks for posting. Visit my site to buy exact replica watches