October tweets of the month 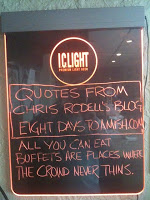 (539 words)
I think I’m finally getting the hang of it. I used to try and force tweets. Now I only tweet when inspired. Lots of inspiration from the news lately. I remain thrilled by the reaction I get from being the bar’s twitterist. I just culled the herd for more bar-worthy ones that I’ll be giving to Dave later today.

I hope he’ll use this one in time for the Friday crowd: “If I limited my conversation to only intelligent people it would be a very lonely existence and I’d have to quit talking to even myself.” I’ll keep you posted.

For some reason, my twitter widget remains busted and if anyone wants to see tweets that actually have to go to @8days2amish. I don’t think anyone cares. Me either.

I’ll be sure you don’t miss anything worth seeing. Thanks for stopping by and have a splendid day! Try and do something to make it a better one for victims of Hurricane Sandy.

• Some fathers are guilty of helicopter parenting. I'm a sidecar parent, just along for the ride.

• If some people suffer from Irritable Bowel Syndrome then doesn't it stand to reason that those of us who do not enjoy cheerful bowels?

• Never once have I been that forlorn, heartbroken and depressed guy at the bar. I'm just always the guy he sits right next to.

• Does the god in peanut heaven look like that dapper monocled gent on the Planter’s jars? I call him Shelly.

• We name our dogs Rover, Snickers, Socks and a plethora of other colorful handles. But you'll never meet a cricket that isn't named Jiminy.

• The DeVito-Pearlman breakup involves the separation of the two smallest bodies since the splitting of the atom.

• In the future we will live in smart structures that will shrewdly detect energy needs, flaws, security, etc. They will be Sherlock Homes.

• I'm such a reflexive pacifist the only thing I instinctively kill is time.

• There were no drive thru windows when I was a boy. Now there are two. In 20 years it will take four windows for them to screw up your order.

• If it's true that impairment begins with the first drink then I've been impaired since 1978.

• I keep thinking solar plexus is some kind of exciting new green energy, but something in my gut tells me it isn't.
• One problem with most urban parking lots: They fill up too fast. They are parking littles.

• Vanity plastic surgery will become so prevalent men will flock to a store called "Dicks" and they won't be there for sporting goods.

• I woke up to a nightmare last evening. I was in a raft on a stream called Creativity Creek and couldn’t conjure an imaginary paddle.

• I feel like I should be considered for the Medal of Honor for bravery every time I answer the family phone without recognizing the caller.

• Kate Gosselin fired as a blogger? You mean someone actually gets paid to blog? How come no one told me? http://www.EightDaysToAmish.com

• I’ve spent nearly my whole life in one or the other and still can't distinguish between bar, tavern, pub or saloon. More study required.

• How come the only thing anyone ever battens down are hatches? Battening sounds fun. I’m going to try and batten down the dog.

• Any outdoor roadside advertising that features spurious claims should be called a bullboard.

• Cialis ad saying to contact doc if erection lasts more than 4 hours has me sadly wondering if my life's erections have totaled 4 hours.

• Discussion of North Korean villain continues to confuse me. I thought Rudolph was the deer leader.

• Once they teach you to strike while the iron is hot, is there anything left to blacksmith school? Student loans must be miniscule.

• I always write with loud music playing in the hopes it’ll drown out the voices in my head that keep telling me writing is a waste of time.

• I am now the bar’s official twitterist