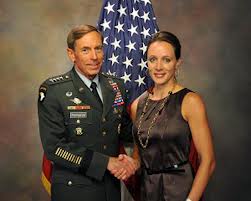 (669 words)
It’s purely coincidence the story of a famous American spy who kissed a woman who wasn’t his wife broke the same weekend millions of Americans went to see a movie about a spy famous for kissing women who aren’t his wife.

What would James Bond say about General David Petraeus?

I think he’d be neither shaken, nor stirred.

Of course, the conspiracy-minded among us -- and brain-munching zombies are less resilient -- say the timing of the affair’s revelation is evidence President Obama is dumping Petraeus because the CIA chief knows damaging information about a Benghazi cover-up.

So now instead of dealing with one scandal I don’t understand, I’m now juggling two.

The far-right outrage over Benghazi it seems is because government sloppiness led to four tragic deaths.

History, our most reliable teacher, shows these very same people expressed zero outrage when government sloppiness led to tens of thousands of tragic deaths in Iraq.

I guess murder matters more when it’s not your guy, body counts be damned.

Call me naive, but I’m never surprised when Americans get killed for being American in places where they hate Americans. These hysterical inquiries about what was and wasn’t done in Benghazi strike me as ridiculous.

And who knew having a consensual extra-marital affair disqualified someone from being a spy? I thought telling pillow talk lies was part of being a spy or at least one of the perks.

You know, “Close your eyes and think of England!”

That’s a cheeky British phrase for doing something -- usually something sexual -- you’d rather not do.

I don’t think that was the case with Petraeus and Paula Broadwell, a woman I’d describe as fetching if it didn’t have such canine connotations. She’s a babe. Unfortunately, she’s a babe with a husband and two dependent babes of her own back home in Charlotte.

She wrote the glowing Petraeus biography with the now snicker-inducing title of “All In.”

Part of me thinks that if someone devotes two years to writing a book that says what a great guy you are, sleeping with her is the least a gentleman can do.

If anyone ever does that for me, I promise I’ll come straight over and clean your gutters.

And that’s not some provocative sexual innuendo. I despise cleaning our gutters and doing that for someone else is the most humanitarian gesture I can muster short of handing over a spare kidney.

I don’t know where this one’s going to end, but I’m hoping it’s not with congressional hearings where panels of serial adulterers spend hours questioning a witness about his or her adulterous behavior.

I don’t see any homeland security breach here, other than the psychic security the involved families are bound to be feeling in their once happy homes.

But it pains me to think common infidelity is going to cost America the talents of this man who has served so well for so long.

I mean, nobody does it better than the spy who loved Mrs. Broadwell.

I hate to think he’s going to be exiled to some murky Halliburton consultancy where he’ll be forced to spend days listening to Dick Cheney predict daily doom and chart how shareholders can profit from it.

It puts Republicans, the party that recently enthused about having him run for president in ’16, in a tricky position. They’re conditioned to publicly abhor infidelity -- unless it’s practiced by party sex symbols like Newt Gingrich.

Obama and the Democrats seem to be in an unforgiving mood, too. They’re sensitive about the Benghazi charges and were hoping to enjoy a longer bask in the electoral results.

It’s times like these I wish our leaders had some European sensibilities. Consensual  intimacies trouble them not even a bit.

They are baffled by our puritanical streak.

They think private infidelities are best left to angry spouses, not congressional committees.

It’s kind of the way I feel.

Even our best spies are human beings who on occasion will lapse into being human.

It’s a mindset over which enlightened souls everywhere can, hmm . . .

What’s the word I’m looking for?

• Just the facts: my interview with Harry Morgan
Posted by Chris Rodell at 11:26 AM