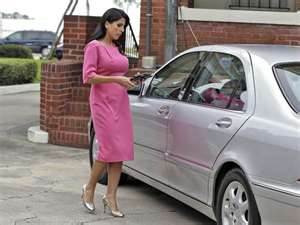 (732 words)
I was hoping circumstances in the scandal involving two people with combined zero body fat would evolve enough to allow me to write a headline that includes the words the "Plot Thickens.”

So I guess I should be grateful for investigators for revealing the existence of Jill Kelley, a woman described by neighbors as “The Tampa Kardashian.”

For those of us blessed with romantic natures, this once all seemed so simple.

Spy meets girl, girls writes book about spy, clothes fly and the late night comics simultaneously exalt the book composed during the affair is titled “All In.”

Everything I’ve read about Paula Broadwell indicates she’s a quality human being. Accomplished in her field, she has the bearing of the thoughtful American scholar she is. In fact, her poise is more apparent than even her looks. And I’m shallow.

Kelley has the bearing of Snooki.

If Broadwell warns me to avoid Kelley, I’m going to listen. Not that Kelley’s my type. She looks like Russell Brand’s type.

This just keeps getting more and more strange.

Now we come to Marine Gen. John Allen. Talk about bearing. He looks like he could drill holes in your heart with his eyes.

That’s why it’s difficult for me to suggest somebody important needs to treat him like we treat our 12-year-old daughter. We need to take away his toys.

Like most parents of 12-year-old girls, we’re wrestling with how to manage her precious tech time. Her infatuation with her iTouch reminds me of the infatuations  our top brass feels with women whose chests are significant for things other than service ribbons.

But of the two of them, I guarantee you our daughter is being more judicious than the general.

Investigators say that number seems inflated because some pages may include two words like, “Yep, sweetheart.”

No one will ever be able to explain to me how a general managing a war has time to type ANYTHING to a Tampa housewife.

I reflexively feel like confiscating Allen’s smart phone and sending him to his room to spend the next hour reading Harry Potter.

All the people who know them best swear Gens. Petraeus and Allen are outstanding leaders and judges of character. Of course those that know them best are fellow generals and now we’re all left to wonder how reporters pried them away from Angry Birds long enough to extract comment.

I predict her infidelity with Petraeus will be the only scandal to emerge about Broadwell.

Not so with Kelley. She will for the next month be what journalists consider an authentic treasure chest of scandalous revelations, even as I question the authenticity of her treasured chest.

It’s shocking both generals vouched for her in court cases and were instrumental in seeing she obtained an honorary South Korean consul general title. She used it to try and bully 911 operators into doing her bidding yesterday.

“I’m an honorary consul general, so I have inviolability,” she said in requesting police shoo reporters from her lawn. “I don’t know if you want to get diplomatic protection involved as well.”

My blog had 323 Ukrainian readers this month -- “Pryvit Ukrainian dryhs!” Maybe they’d give me one. I could get a special license plate for my dinged jalopy and park it in the bar’s handicap spot just as soon as they designate one.

Now you’ve got an FBI agent sending shirtless pictures of himself to Kelley.

It’s impossible for me to express the level of dismay I feel in a world where I, an underemployed blogger with a rat hole office about a corner tavern, feel compelled to scold our generals and federal agents for acting childish.

It’s so bad I am going against my instincts that cry for universal equality and argue it’s time to take discriminatory actions for the good of the country.

Do it now or we’re at risk of watching them become the armed farces.

• When breast implants are booby prizes