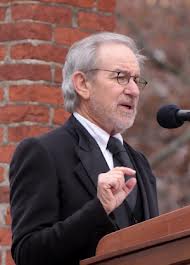 (735 words)
Sitting there freezing our butts off about 300 feet from where Abraham Lincoln delivered the Gettysburg Address, I wondered if Lincoln lied.

If we were, then how come I had to wait about 90 minutes in the cold to hear Steven Spielberg speak?

It eventually dawned on me that all men and women are created equal, but many of us spend the ensuing years goofing off, getting drunk, sleeping in or cutting short productive work hours so we can race home in time to watch Drew Carey announce the Showcase Showdown on “The Price is Right.”

We have our priorities.

As a filmmaker, Spielberg is without equal. It was a thrill to be among the 9,000 or so attendees at the Gettysburg Soldiers National Cemetery on Monday as part of the 149th Remembrance Day activities.

And he gave a great speech, as did historian Doris Kearns Goodwin -- and that’s a difficult compliment for me to bestow upon an avowed plagiarist.

I’m always amazed at the effect being near a celebrity has on me. As Spielberg walked out, he gave a dapper bow then spent considerable time scanning the audience.

I straightened up, put my arm around my daughter and drilled him with eye contact.

I was hoping Spielberg would notice me and think, “Now, there’s a clear-eyed young go-getter. Brings his daughter to Gettysburg! No doubt a man of substance. Probably a responsible social drinker like myself. I wonder if he’s a writer. I’m going to approach him and introduce myself.”

If the great director thought this, he didn’t act upon it.

I thought momentarily about writing the premise of my unpublished novel on a piece of paper and tossing it to him as he concluded his speech.

But it was a bit windy so I’d have had to wrap the note around a heavy rock. And me tossing a rock at Steven Spielberg during his speech would have certainly drawn security.

And by security, I’m not talking about the several thousand bayonet-armed Civil War re-creators. On each side of the stage were two severe-looking men in overcoats who looked like today’s Secret Service agents minus the eyes filled with 21st century hooker lust.

I guess maybe they were there to prevent a John Wilkes Booth re-enactor from assassinating the Abraham Lincoln re-enactor.

I’m happy to report our daddy-daughter weekend exceeded my fondest hopes and expectations. It was marvelous.

History-rich Gettysburg is one of America’s greatest small towns. It is filled with wonderful restaurants, museums, book shops and according to Josie, 12, the world’s greatest candy store. It’s “Sweeet!” at 100 Baltimore Street, home of the two-foot-long gummi earth worm.

I think years from now I’ll look back on this weekend as the one where I succeeded in ways General Robert E. Lee did not.

Our tasks were similar. We needed to conquer a resilient combatant on foreign soil against long odds.

With Lee it was the Union army.

With me, I was trying to bond over history with a 12-year-old girl who dearly loves her mother and iCarly (in mostly that order) and spent the first morning morose at the unbidden separation.

But as our days filled with activities, she began to brighten and by the middle of a three-hour battlefield tour, the tide had turned. Our expert guide was teaching us how equestrian statuary can be used to discern the rider’s battlefield mortality when Josie asked if she could use my iPhone.

I trembled. Was she going to text call Mommy she was bored? Disperse Facebook ridicule?

She wanted to take notes.

She was so inspired by what she was learning she began taking lengthy notes to remind her of stories she will this week share with her class.

My heart swells with pride. I have forged a creative bond with her that will endure and strengthen throughout our lives.

All men are created equal; mothers and fathers are not.

Biological imperatives mean fathers of daughters are destined to be parental punchlines. The advantage will always reside with the female because in the eyes of our children, mothers suckle while dads just suck.

Like it or not, that’s the way it is.

And this Dad’s truth goes marching on.

• My work week sabotaged by distractions
Posted by Chris Rodell at 1:42 PM

History making ,victory worth fighting for Love.
strategic fathering has never been so well documented. Thanks for writing this kind of personal stuff.
It's rather heroic of you
Bryan

Chris, very warm and touching post. As a father of a daughter (though now grown), I can relate! And thanks for championing American history - it sorely needs it these days.

Thanks so much, Joe and Bryan. So happy to know you guys are reading. Happy Thanksgiving!