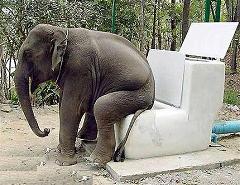 (731 words)
My daughters and I were witness to the only group of noble workers who are destined to go un-pandered to by both presidential candidates.

We saw them in action during the Sunday matinee at the Ringling Bros. and Barnum & Bailey Circus here in Pittsburgh.

I adore the circus. It truly is the greatest show on earth.

If my parents took me to it as a child, I do not recall. We took our daughters there two years ago and it’s become a staple.

Every two minutes there’s another colorful spectacle that had my 6-year-old getting all bug-eyed and going “Wow!” It’s magic.

During the three hour “Fully Charged” show we saw feats of strength, high-wire daredevils, men on 20-foot stilts, Olympic-worthy acrobats and saw a giant crossbow launch the Human Fuse from one end of the arena to the other at 65 mph while on fire.

That these men and women who risk life and limb should be upstaged by poop scoopers is bound to chagrin anyone who hopes life is fair.

But animals are a big part of the circus -- and I understand that troubles some animal lovers.

They think these magnificent beasts should be free to roam in wilderness as nature intended.

I agree. But elephant habitat is rapidly declining and I can’t help but think there’s some suburban Nairobi farmer who for years prayed for the day when he wouldn’t have to worry about those damned elephants stomping through the bean patch two days before harvest.

So the elephants are here where animal rights groups are ready to pounce at any hint of mistreatment. We can only hope they are lavished with attention and care.

They are highly entertaining. They are trained to dance, to spin on pedestals and rear back on their hind legs. It’s delightful to see anything standing 12-feet and weighing seven tons appear so nimble.

The elephants, I learned, require 300 pounds of foliage everyday. Logically, the output is just as considerable and an elephant’s going to go when and where an elephant’s got to go.

That means right there during the performance, something Hampton to his credit has never done.

It’s a sight to behold. This one elephant was right in the middle of a routine where he rolled over with his three mates.

Then more than 8,000 people gasped. I thought for a moment they were constructing an elaborate Greek temple column by column.

It looked like one of those massive Playdoh mold formers you squeeze to make log and star shapes.

We decided right there to call that elephant Dumpo.

As amazing as that was, what happened next was even more incredible. A squad of five or six black clad poop scoopers seemed to rappel from the rafters. They vanquished the pile in seconds. Their coordination and efficiency was breathtaking.

Still maintaining his role in the routine, he rose to all fours. By now every eye in the arena was glued to the elephant’s ass as it resumed its mighty pucker.

None of us will ever forget what happened next.

This stout woman maybe 5-foot-6 stood raced to right beneath the maw and raised her shovel to a 45-degree angle from the elephant’s manhole-sized anus to her outstretched arms.

It was like she’d heroically dashed to just below Niagara Falls right before someone was about to flip the “on” switch.

Anyone with an appreciation of math and gravity trembled for the pending embarrassment. I said a small fast prayer that experience had taught her to breathe through her nose.

Our fears were misplaced. The gal knew exactly what she was doing. She deftly snagged what must have been 25-pounds of dung and held steady until the animal relaxed.

It was the greatest show on earth.

As she dashed away, the whole crowd cheered.

I think the elephant thought we were cheering for him because I swear I saw him smile.

We filed out of the arena exhausted. There’s just so much the great circus had to offer it left us joyfully fatigued.

You could say we were all pooped out.

• A beef about cow flatulence