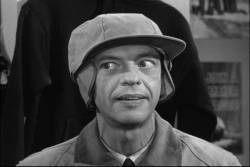 (726 words)
An Italian mannequin manufacturer is charging $5,072 for store mannequins that can spy on shoppers with eye-embedded cameras that profile customers, they say, to mine more shopper data.

It’s maybe the first time in history true dummies can be called visionary.

The Almax SpA EyeSee mannequins scan and gather data with the goal of informing stores about what interests which customers. To me, store security is the more obvious application. In this regard, highly motivated Dep. Barney Fife was visionary beyond his years.

I remember “The Andy Griffith Show” episode in which Fife pretended to be a store mannequin. His plan was to stand there motionless and spring into action any time he saw someone attempting the five-finger discount.

It was a brilliant idea, but the execution was flawed. A fly kept buzzing Barney’s face and one runny-nosed kid blew his cover by standing there and asking him questions about things like fishing.

In the end, however, he did catch a little old lady who’d been robbing Ben Weaver blind.

Biologists have detected a chemical reaction in shoplifters stemming from the “high” that comes from getting away with it. Alas, I’m not immune to this.

I remember my first shoplifting experience. I was in the fourth grade at Julia Ward Howe Elementary School in Mt. Lebanon -- and admitting I attended school in posh Mt. Lebanon is way more difficult than admitting I was a crook.

There was a little general store right next to the playground. I was in there with a couple of my hoodlum friends. I remember the clerk being distracted and the Sugar Daddy beckoning me from behind the counter.

Quick as lightning, the teeth-rotting confection was in my pocket.

The rush was fleeting and overwhelmed by shame. I knew what I’d done was wrong.

I haven’t stolen from a store since.

But there is one venue in which I steal services and will, I’m sure, continue to do so whenever I can get away with it.

Regular readers know my love-hate relationship with the home team. I adore baseball, but Pittsburgh is now into its 20th year of losing. Twenty years!

For some reason sneaking into a sporting event’s always struck me as fair game. Perhaps it was because my late father often regaled me with stories of his sneaking into old Forbes Field for so many splendid afternoons of freebie ball.

It was 1992. My friends and I were partial season ticket holders the year the Pirates were playing the Braves in the playoffs.

It was so long ago I actually had a job that came with a working press credentials.

The games were in old Three Rivers Stadium, a baseball venue that included many obstructed seats deemed unworthy of spectator viewing. So the seats were empty, even as they were more near the field than many regular seats, including ours.

So I’d take my press pass and one ticket and march solo through the turnstyles and get a stamp that would allow me press re-entry privileges.

Meanwhile, one of my friends would sell the remaining three tickets for an indecent profit which we’d use to buy multiple domestic beers the Pirates were selling for an even more indecent profit.

Then I’d one-by-one bring my friends in and we’d filter our way to the front row of the obstructed seats, which were better than ours. We’d toss the usher a $20 and had the whole section to ourselves.

I remember telling my dad about the scheme. The old man beamed with pride.

I still sneak in whenever I can and, in fact, the last game I ever attended with my dad was done on a clever sneak. I understand what I’m doing is stealing, but the urge to sneak into a ballpark is difficult to resist. It’s an urge that grows with each Pirate losing season.

It just galls me to pay that much money for a team that just keeps on stinking.

So I vow to continue my subterfuge for as long as the Pirates continue fielding so many players who turn into lifeless mannequins after the all-star break.

I may be a petty thief, but I’m no dummy.

• Taking pregnant women to the ol’ ballgame
Posted by Chris Rodell at 1:40 PM