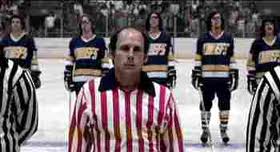 Disclaimer: I posted this and immediately heard from a disgruntled friend who hates this one. He doesn't like the Nazi reference or the contention that too much patriotism can be, as I say, tedious. He said this one wasn't one of my best. I agree. I appreciate any reader who holds me to a high standard and will try and keep his or her fair complaints in mind. I hope you'll stick with me through low spots like this. So . . . you've been warned. Read at your own risk. CR

A western Pennsylvania controversy has erupted that is defying the laws of nature. Yes, there’s a firestorm on ice.

A local youth hockey league is trying to save money by telling its teams to cease “Star-Spangled Banner” pre-game performances. They want to eliminate the anthem because ice time is expensive and overly long anthems have meant games ending with time still on the clock.

This is especially important to me because I was once a participant in that very league. Hockey was our game. I played on all the traveling all-star teams and was captain of my high school team.

When I heard the news I was surprised they were singing the national anthem there at all. They never did it before games when I was a kid.

In fact, the song I remember them playing during our warm-up skate was Elton John’s “Saturday Night’s Alright for Fighting,” which really psyched us up. We teenagers loved the song and all believed, man, that Elton John kicks ass. He must be one really macho dude.

Here’s what I think I’d have thought if they’d have swapped the ballsy rocker for the national anthem: “Man, this is so boring. Nobody’s even singing. I don’t know why they make us do this. Just drop the puck so we can play.”

I’m always wary of what I call patriotic creep. We’ve seen it with flag pins, the pledge of allegiance and various patriotic ditties.

The world becomes awfully tedious when you spend your time trying to out-patriot the next guy. Since 9/11, baseball for instance added the singing “God Bless America” to many games during the 7th inning stretch.

The controversy is occurring while I’m enjoying Erik Larsen’s outstanding “In the Garden of the Beasts,” about William E. Dodd’s tenure as U.S. ambassador to Germany from 1933 to 1937. It was an era where the Nazi seed began to beanstalk and inflict its insanity on every aspect of daily life in Berlin.

It became mandatory that everyone greet one another with the “Seig Heil!” salute and any display of patriotic devotion had to be observed with joy and reverence. If someone turned their attention from a storm trooper parade to smile at a beguiling bird, the storm troopers would break ranks and without fear of repercussion smash the nature lover over the head.

Soon, people were being judged on their patriotic fervor and secret police were making midnight visits to those who’d been deemed by neighbors with grudges as being insufficiently patriotic.

Of course the two have nothing to do with one another, but I thought I’d mention it to show my historical gratitude I wasn’t a smart ass blogger in Berlin 79 years ago.

If I had to pick, I’d come down on the side of my old league ditching the anthem. But I sense an opportunity for compromise. How about this?

Focus on the singer, not the song. Each singer must agree to sing the song in under 30 seconds.

I just timed myself and on the first try made it through in 23.7 seconds.

Too many anthem singers believe they are auditioning for a big record deal. Loved ones film the performance for YouTube posterity and the singer is encouraged to  emote, pout and extend every note beyond its melodic stability.

Or maybe instead of pretty young singers, we could use crusty barn auctioneers sure to keep it snappy.

I think that’s a great compromise and would be acceptable to the traditionalists, more so than my secondary proposal, I’m sure. That being sing only every other word:

“Oh! can see the early
What proudly hailed the last
Whose stripes bright thru perilous
O’er ramparts watched so streaming
And rocket’s glare bombs in
Gave thru night our was there
Oh! does star-spangled yet
O’er land the and home of brave?

That would cut in half the time of every single rendition, and the mind has a way of filling in the blank spaces, an exercise that would help increase the mental agility of the your typical boneheaded sports fans without forcing them to do things like Sudoku or Jumble.

Or how about this? Let’s go back to the original intent.

Woodrow Wilson in 1918 ordered it played when the flag was raised during military ceremonies.

I like the idea of changing tradition and having the flag raised prior to games. It would be dramatic. Plus singing the song could be a way of saying, “Hello flag! You look great! Nice to see you!” which I think would make the flag feel good.

And let’s have a rule where the anthem won’t be played at any sporting event where the players outnumber the spectators.

So please help spread these common sense solutions so we don’t have to go through this again.

I wouldn’t want to have to go all Elton John on anyone's ass.

And that threat would have had a vastly different meaning back when I was playing hockey.

• I pledge allegiance to the pledge of allegiance

• C’mon America! Let’s all sing the national anthem!
Posted by Chris Rodell at 10:37 AM