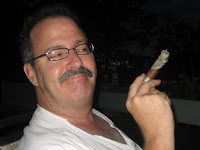 It was already three inches long and still growing when I called Val out on the porch to give it a good long look.

“Are you not impressed, babe?”

She just stared. Her incredulous face meant it was time for the next step.

“Get the kids! They gotta see this! And bring the camera!”

How can a man who feels awkward eating a banana in public be so proud to suck on a cigar?

I was in the midst of growing the world’s longest cigar ash and wanted witnesses.

The achievement’s been a dream of mine since I was a young reporter in Nashville and heard a story of a legendary attorney who used to distract jurors by growing a cigar ash that refused to fall.

I was told he’d insert a straightened paper clip right down the center of the cigar. The wire would somehow unite the ash into maintaining its pre-fire form.

The attorney would flamboyantly puff away on the cigar and stare at the ash as it grew to preposterous lengths. The gawking jurors became too pre-occupied by the spectacle to pay any attention to the prosecution.

I’d since heard the attorney was the great Clarence Darrow and the setting was the Scopes Monkey Trial, upon which one of my favorite films, “Inherit the Wind” (1960), is based, but this interesting Straight Dope piece debunks the contention.

I’d given the attempt meager efforts over the years, but this time I was determined to grow a 6-inch ash.

The effort had me recalling a smoke from a few years ago when an early curfew meant my companion had to ditch me in a smoky tavern on Pittsburgh’s South Side. I didn’t have my friend, but I did have my cigar.

I clipped it, lit it and began to commune with all the ghosts in the smoke. I would never dream of bothering a stranger with my smoke, but this was a smoker friendly bar and at that moment I was a friendly smoker.

So I was a little taken aback when a cigarette smoker next to me said in a challenging voice, “Just what is it you like about cigars?”

I surprised him with my answer. “It’s an hour-long commitment to idleness.”

A good cigar is too expensive to hurry or throw away, I said. The smoke has a way of inoculating you against bores and chores alike. You can’t go pick up the kids, you can’t clean the gutters, it’s just you and your cigar.

I told him to check out the great 1995 cigar-smoker Harvey Keitel/William Hurt flick, “Smoke,” a movie that teaches viewers how to weigh smoke. It relates how tobacco pioneer Sir Walter Raleigh weighed an unsmoked cigar on a balance, then lit and smoked the stogie, careful to preserve all the ashes.

When the cigar was done, he set the dead butt amidst the ashes, subtracted the one from the other, hence, the weight of smoke.

I was thinking about this on the back porch as I chased ash immortality.

I was closing in on my fourth inch when it began to occur to me I’d made a serious error. I’d been so consumed with setting some kind of record I forgotten my commitment to idleness.

I was puffing away like a locomotive, not at all my usual leisurely pace.

I was smoking the cigar so aggressively I was becoming light-headed. I started feeling woozy and sick to my stomach, the way I feel when I realize the weekend’s going to involve things like yard work.

Feeling faint, I set the half-smoked cigar down on the porch and let it expire. I sat there in the cool evening breeze to recover and mull my errors.

For a man so concerned about his masculinity, I’d really sucked the hell out of that thing. Rather than let it lead me, I tried to lead it.

For guys like me, being a half-ashed failure in the pursuit of an extra inch or two beats being exposed as a man who comes off half-cocked.

Several clever (in my own mind) comments that include the word "sucker" come to mind, but I'm going to resist using any of them. That's how much I enjoyed reading of your latest effort to puff your way into immortality.

You know, I couldn't really get a handle on the end. Wish I believed in bloggie do-overs. I'm sure you feel the same sometimes. Don't know whether it works or not so it's heartening to hear it works for you, Keith. Have a great weekend!