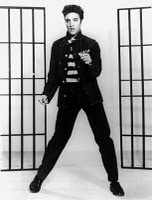 I remember clearly what I was doing 35 years ago today when my brother came racing up the driveway to tell me and Daryl Delrayo that Elvis Presley had died.

Eric delivered the news with the somber urgency befitting the earthshaking news.

I don’t remember my reaction as much as I remember Daryl’s. He said. “Who cares? He lived a long time and had a good life.”

Our old neighbor was only half right. Elvis was just 42.

I love Elvis and wish he’d lived the full measure. I’m sure he’d still fascinate. I still thrill to his music and what he meant to rock ‘n’ roll.

We got a kick out of hearing him mentioned during the moving “Freedom Rising” performance at the National Constitution Center in Philadelphia where he’s hailed as “the only King America will ever revere!”

So I thought this morning I’d re-run -- now for a record third time -- an Easter 2009 story about the week I ate like Elvis.

And I hope at some point today “Jailhouse Rock,” “The Devil in Disguise,” “U.S. Male” or one of your favorite Elvis songs gets stuck in your head.

You’ll be sure to have a great day.

What to make of his legacy? I'll leave that to others to discern.

But this much I know: Elvis Presley was one of our greatest Americans.

And Daryl Delrayo was one of the worst.

I’ve spent a good bit of time this week thinking of my culinary apocalypse after an unbeckoned e-mail from the Southern Food and Beverage Museum in New Orleans sailed into my computer. It read:

“Southern Fried Elvis, an exhibition of eight cookbooks that focus on the food eaten by the late King of Rock and Roll, opens to the public on Friday, April 24, 2009.

Ah, yes, I remember it well. It was 1997 and I was watching an anniversary special commemorating the 20th anniversary of Presley’s death. I remember one woman saying she used to bring huge trays of food to the King’s Graceland bedroom where the big boy was chowing down.

The same goes for Elvis. Thanks to the all-Elvis channel on XM satellite radio, to this day I still enjoy Presley as much as the Rolling Stones, Tom Petty or any other top band on my playlists. I remember when John Lennon was asked about the influence of Frank Sinatra, he said, “Before Elvis there was nothing.” And how Bob Dylan said the first time he heard Elvis’s voice he knew he’d never have a boss. “Hearing Elvis for the first time was like busting out of jail,” says Dylan.

But none of that was on my mind when Val and I loaded $432.33 worth of high-caloric groceries into the trunk that hot summer day. We spent the next three hours preparing a feast fit for The King . My bible was Brenda A. Butler’s -- be sure to sing it -- “Are You Hungry Tonight?” cookbook of Elvis’s favorite meals.

There were cheeseburgers, bacon and eggs, pork chops, nanner pudding, and the classic fried peanut butter and nanner sandwiches. There was so much scrap food for that initial photo session the slobbering dog got truly fed up and went downstairs to hide behind the furnace. And with every meal, I always had a big glass of frosty milk, just like Elvis, because as Presley liked to say, “Milk makes ya sexy!”

That 35 second call left me all shook up and turned my week into a dietary death march. I would wake up feeling bloated. I’d munch on donuts while I cooked the bacon and eggs. Then I’d consume the food, wash the dishes and repeat.

In the end I’d gained 20 pounds, rented an Elvis jump suit from a local costume store and posed next to a pink Cadillac for the story about the week I ate like Elvis.

It took about two weeks to recover. The Enquirer ran the story over Thanksgiving (I tell you, they’re geniuses). The story was a minor sensation. I heard from morning radio giggle shows all over the country.

Thank you. Thank you very much.