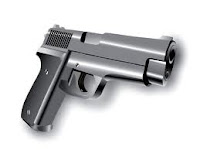 We came home from our Saturday siesta and asked Josie if anything unusual had happened.

“Nothing really. Greg was in his underwear standing in the middle of the street shooting his gun around.”

In fact, three elements of her sentence constitute something unusual happening.

On Saturdays when Val and I go out for afternoon drinks we feel a little bit sheepish about leaving the kids home alone. When people ask about them, Val says we leave them home alone for a couple hours because Josie’s “almost 12” and very responsible.

I always correct her and say Josie’s 11. Because that’s what the headlines will say if she or her sister, 6, accidentally burn the house down.

They won’t a say, “A Bright, Responsible Nearly 12-year-old Girl and her Darling 6-year-old Sister Escaped Harm When -- Whoopsie Daisy! -- Their House Burned to the Ground.”

But we balance her growing responsibilities with our need for alcoholic relief and once every week or so head down to a neighborhood restaurant for drinks and appetizers.

It’s lovely, but we do worry, naturally, as any good concerned parent would.

But hearing Greg was in his underwear firing a gun in the middle of the street was a tad disconcerting.

We live up in the woods. Our next door neighbors are remote. We don’t see them much, but we get along great.

Here’s how I met Greg: It was snowing heavy the stressful 2007 day we moved into our new house.

I looked out the window and saw Greg come roaring up on an ATV with plow attachment and start clearing our driveway.

I went out, introduced myself, and thanked him for the surprising courtesy.

I wasn’t kidding. A good neighbor is like a good spouse. It it adds priceless contentment to your existence.

From the street, our house is to the right of Greg and Donna’s.

It’s likely the only instance in which I’ll ever be to the right of Greg in anything.

If he cared at all about politics, and he does maybe a little, he’d be to the right of Dick Cheney, a man who likely stands up in church on Christmas Eve and objects when the pastor says it’s time to pray for peace on earth.

I don’t think we’ve ever had a conversation about a local or national problem where he didn’t propose a solution that didn’t involve killing someone.

This would trouble some people, I’m sure. These are people who I suspect don’t mind shoveling their own driveway.

I like him a lot. He’s a great neighbor, one of the best we’ve ever had.

He likes me, too. I can tell this because he’s yet to kill me.

He drives the gargantuan machines they use to build interstate highways. It’s hard work that takes him around the country for months at a time.

It’s difficult for me to stand next to guys like him because I’m always concerned they’ll ask what I’ve been up to.

I’ve yet to tell him I’ve authored a self-help book called, “Use All The Crayons! The Colorful Guide to Simple Human Happiness.”

Maybe I’m wrong, but I think men like him will find it, well, just a little unmanly!

Now, I’d have given him the first copy if my book was called, “Use All the Guns! The Colorful Guide to Simple Human Happiness.”

Come to think of it, in America today that would be a sure best seller. I’m going to have to whip up a proposal.

So when Josie told us he was out in the street firing his gun in the woods, Val and I were concerned. She asked if I was going to do anything.

Indeed, I said. I’m going to do nothing, which is on the passive side of something.

I figured Greg had his reasons and they were probably good ones.

Ten minutes later, the phone rang. It was Greg.

“Hey, man, I figured you were wondering what all the commotion was about. We had a raccoon come up on the porch and start acting funny. It looked rabid. So I followed it across the street and shot it in the woods. I wanted you and your girls to know to be careful if you see any other raccoons running around in the daylight.”

I thanked him for his action and for taking the time to call and warn us.

I wish America, so divided, could get along as well as Greg and I do.

We’re very different, but I’m very happy to know him and have him for a neighbor, even as I would have reacted differently to the situation.

Me, I’d have invited the raccoon in for soothing tea while I checked the internet to see if it was covered under Obamacare.

The moral of the story for me?

Try not to act too funny next time I show up on Greg’s porch.