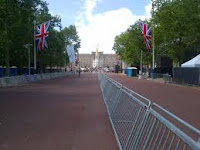 I can’t believe the NBC conglomerate networks that just spent the past two weeks filling our lives with a 5,000-hour mix of Olympic coverage and “Animal Practice” promos are going cold turkey.

And I think an upcoming “Animal Practice” episode involves madcap efforts to raise the feathered body temperature of a cold turkey.

But from 5,000 to zero hours is an enormous scheduling vacuum. I’d like to suggest filling it with Olympic vacuuming.

I would. I’d take most of the week off to sit rapt in front of the TV staring at non-athletic and likely hungover minimum wage workers tidying up London. Competitive cleaning would be every bit as compelling as some of the more obscure Olympic events.

There could be recyclable trash sifting, speed sweeping, flag and banner roll up relays, and outhouse interior sanitization -- a timed event that would would show average blue collar workers can when properly motivated move as rapidly as Usain Bolt.

It’s been quite a run for London, a place I’ve yet to visit, but feel like I now know by heart. In the past year, they had the royal wedding, the Queen’s Jubilee, the Olympics and -- not to be morbid -- but 86-year-old Queen Elizabeth could go at any minute. That, too, will be a global event.

For her loyal subjects, that will mean an historic opportunity to reflect and commemorate a beloved and monumental life.

Know what it’ll mean for me?

Not the high-tech confusing pseudo-sport that for some reason is contested in bee-keeper outfits instead of -- Arrr! -- traditional pirate garb.

I’m talking about what to me was the very most impressive physical entity constructed for the entire Olympics: The common nipple-high metal security fence.

It is to security what Stonehenge is to Druidic legend, something vast and inexplicable.

Its deconstruction would be the centerpiece of any Olympic clean-up coverage.

I watched without fail any competition that took athletes out of the stadiums and let them dash through the lovely English countryside. That means marathons, bike races, and the oddly compelling dork walk.

Early on I noticed the entire routes of these races were bracketed by linked steel security fencing.

The marathons were 26 miles. That means at least 52 miles of about 8-foot segments of steel fencing. That’s prodigious.

But that’s not all. The men’s bike race was 155 miles long. Not all of it, certainly, constricted by fencing, but I’ll bet it needed at least another 50 miles.

It was used in Gitmo-like security pens, off-road bike races, and entrances to each and every event where ever spectators queued up (see, I learned something cultural during 5,000 hours of sports viewing).

I wonder about the logistics of it all. Are these stored in some vast, Delaware-sized warehouse or are they already being shipped to Sochi, Russia, for the 2014 winter games?

It seems a waste to just have them sitting around with nothing to do and, boy, can I relate.

It would be fun to see a stacking contest or a steel-fence version of Jenga using construction cranes or robotic arms.

My search to find more about the fencing on the internet was, well, I guess to extend the fencing references was, you could say “foiled.” We may never know.

It would make sense if the International Olympic Committee were fence proprietors.

But in keeping with the spirit of these games I’d like to think each and every person in Britain will take stewardship of a section of fence and that today they are spreading out en masse to claim and store their fence in the car park until further notice.

It would be a nice civic duty and would please me to think of a great nation where multi-ethnic people are united, not divided, by fencing.

And that a country that was en guard for trouble relied on fencing to ensure such a splendid summer spectacular.

Flip this upside down and you have something very similar to the steel planters that Big Red Sun used as one of their signature landscape elements on other projects.plastic garden fencing