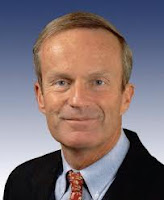 Thanks to Todd Akin, it has now become at least linguistically possible to have an illegitimate child who is the result of a legitimate rape.

Even though you’ve probably already read the controversial comments, I’m going to post them again here just to see if they’re as much fun to type as they’ve been to read.

“First of all, from what I understand from doctors, (pregnancy resulting from rape is) really rare. If it’s a legitimate rape, the female body has ways to try to shut that whole thing down.”

As superpowers go, I wouldn’t rank it up there with X-Ray vision or shape-shifting, but reserve the right to change my opinion if my wife tells me she’s feeling fertile.

Most Americans have never heard of Akin, a Tea Party darling, until the last few days, but the Republican establishment had. He was their man in Missouri, the one who was going to deliver them the Senate majority.

He’s such a key prospect Karl Rove kissed his ass.

And now that he’s upended my entire understanding of basic human biology, I’m wondering can even that intimacy result in pregnancy?

I tried to think of what kind of face a woman would make simply willing herself into not getting pregnant. It would, I’m sure, be very determined, scrunched up and foreboding -- a veritable fist of a face.

It was probably the kind of face legions of college girls used to make when they saw me approaching with romantic intentions.

And then there’s the phrase “legitimate rape,” something else I’d never heard before. It’s a term that makes it seem like some mannerly etiquette is involved.

And God love him -- and he’ll tell you God surely does -- Akin’s not backing down. The entire Republican establishment has told him to quit, but he needs to prove a point.

This election cycle is reminding me of a scene from the great 2005 Viggo Mortensen movie, “A History of Violence.”

The Mortensen character, in this parable representing Barack Obama, is doomed. The odds are all stacked against him. You know he just can’t win.

I’ll relate what the cooly confident William Hurt character, a malevolent adversary, says but will replace his crime-related dialogue with what top Republicans are thinking. Hurt is seated and has his back turned to Obama as he begins to monologue.

“The economy stinks. We’ve convinced our base you’re a Kenyan-born Muslim who is an America-hating failure. They despise your stimulus, your silly light bulbs, and think you look like a doofus when you wear those daddy jeans to Five Guys.”

As he’s saying all this, a thug with a piano wire -- let’s just pretend it’s Trump -- is sneaking up from behind Obama to rip open his throat.

Somehow, the unarmed Obama gymnastically thwarts the Trump guy, uses him as a human shield from another assailant’s bullets, kicks that bastard, and escapes out the door to eventually win the day.

The Hurt character turns to his dying henchman and explodes -- and I’ll paraphrase in case Mom’s reading -- “How could you muck this up! We had him! It was all ours! And you let him get away! You bad stupid man!”

The face of the Republican Party increasingly seems to belong to its bullies and bigots. It’s why a documentary about the GOP’s last two years could be called “A History of Stupidity.” The party that’s spent the past four years nurturing it’s most insane zealots is now dealing with the consequences.

I thought Republicans had a legitimate shot, really, to sweep this election. Now it looks like they’re squandering it.

And please don’t mistake my use of “legitimate shot” as a foray into Akinian debate on a topic that has somehow stripped all the logic from biological.

The very idea is, well, ill-conceived.

Ooh, I love that, Keith. I'm gaining confidence that Obama will win. Not easily, but without giving me a heart attack. I hope so. I hope the GOP realizes following guys like Akin's not the answer.