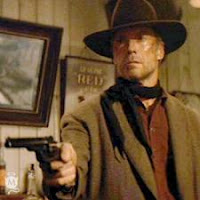 Note: I finished this at 8:30 a.m. and didn’t hear the news out of NYC until noon. How sadly prophetic.

It’s been, I guess, a week or so since another spree killer made the national news. Or maybe not.

It’s been 20 minutes since I last checked the headlines. A lot can happen in 20 minutes.

What I can guarantee hasn’t happened is that anyone has proposed a fresh solution to our national insanity. This summer’s relentless violence has produced a collective sort of shrug.

It’s like we as a nation have decided there’s an acceptable body count that goes along with bestowing even mentally disabled or disgruntled white men the absolute right to possess a few semi-automatic AR-15s with 100-round ammo drums capable of killing 140 people in 140 seconds.

In fact, that’s short-changing the weapon. I read that bullets from the AR-15 -- it’s the kind the Aurora killer James Holmes used -- can be counted on to go through not one but two people at a time.

The scenario reminds me of a pivotal scene from Clint Eastwood’s great 1992 Western, “Unforgiven.”

A naive young assassin nervously gloats about gunning down an unarmed man who’s pants down and seated on the outhouse crapper.

“Well, I guess he had it coming,” the kid says.

“We all have it coming, kid,” wise old Clint says.

Sure we do. We all go to the movies, the churches, the taverns, the gyms, schools, work and the shopping malls -- all sites of recent spree killings.

That anyone in these dangerous times should feel safe while seated on the toilet seems to me a charming notion. Or should I say a Charmin notion!

I believe I stand alone in trying to change the dynamics of this peculiar national tragedy. It was I who offered the Barney Fife Amendment, which would allow anyone, anywhere, to carry a loaded gun.

One condition: you get just one bullet. Use or lose your bullet and in addition to any existing laws you have to go before a judge to explain what happened to your bullet before you get another bullet.

This got zero traction, I’m sorry to say, as did my idea of smart bullet innovation. I suggested the government offer incentives to develop smart bullets that would decide in mid-air if the intended targets deserve killing and then select a more deserving victim.

This is all about preserving innocent collateral damage. The beauty of smart bullets is that in many cases the bullets will reverse and strike the person who fired it, saving police departments a fortune.

Then after the Aurora killings I offered the idea that we could reduce gun violence by having the NRA administer a truly well-regulated militia, the belief being there are more regulations involving the needle artists responsible for tattooing our hillbillies than there are for guns.

This, too, landed with a thud. None of my gun-owning friends said they wanted to sweat out their Saturday hangovers doing calisthenics at the local high school rec fields.

That’s where we are in the gun debate. Every sensible argument offered by people who think there are too many guns, has been gunned down by the people with, duh, all the guns.

The only solution to our near weekly sensational spree killings, they say, are more guns in more places. They think if only there’d been armed hombres like them in the theater, they would have cooly risen amidst the hail of bullets and taken down the killer with one shot.

I think they’ve seen too many movies.

But because I believe the blood-drenched status quo is wholly unacceptable, I at last surrender to their logic.

Let’s try installing racks of loaded guns right next to the fire extinguishers. Signs on the glass can read, “IN CASE OF SPREE KILLER BREAK GLASS.”

There, of course, may be unintended consequences. Angry drunks may break the glass to settle parking space disputes, spouses may escalate infidelity arguments with handy firearms, and there are bound to be casualties involving ticket takers, young mothers or 12-year-old kids who picked the wrong day to see the Batman movie.

Oh, well. Let’s just figure they’ll all have it coming.

By doing continuing to do absolutely nothing, I’m convinced we all do.