I am now the bar's official Twitterist 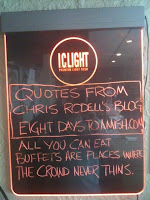 I’m up above the water and can see the dorsal fin cutting the waves beneath me. Yes, I’m in the midst of jumping the shark at my favorite tavern.

I can’t complain. I’ve enjoyed a nice run, but my best days at The Pond, I’m sorry to say, are behind me.

Evidence of this is now splashed on the electronic chalk board that used to entertain bar patrons with great sports trivia.

Now, the entertaining is all up to me.

I’ve become The Pond’s official Twitterist. This is odd because many of the bar’s patrons haven’t the foggiest idea of what Twitter is.

They’re like Dave. He owns the bar and restaurant and the second floor apartment where I keep my shabby little office. But he doesn’t own a computer. He never will.

You could call that old school, but today even all the old schools have computers so I don’t know what you call it.

So if I write a blog post I want to share with Dave I have to print it out and hand it to him. I don’t mind. He has a joyful laugh and it makes me happy to do anything short of tickling to provoke it.

As for tweets, I tell him all my best lines, and he usually returns fire with something equal or superior. He’s hilarious.

But sometimes I’ll think of something that can’t be conveyed orally, like something involving word play.

That was the case with this line I tweeted: “A mohawk is a colorful hairdo. A Moe Hawk is an irrationally angry bird that inflicts slapstick violence on a Curley Hawk or Larry Hawk.”

Allow me to boast, that’s brilliant. It combines cerebral humor with The Stooges, the most felicitous pairing since pornography and the internet.

But it doesn’t work if you say it aloud. It must be eyeballed to differentiate between the Mo’s.

So I decided to text it to Dave. He loved it. Said it made his day.

“You know,” I said, “if you had one of those things you call an internet box you’d have access to this kind of genius all the time.”

“Well, that’s not going to happen,” he said. “If you think of something clever like that, why don’t you just scribble it there on a cocktail napkin and push it toward me when you’re ready for a fresh beer.”

We were at loggerheads. I sit at his bar to complain about how much time I write for free on the internet. I don’t want to write for free inside the bar, too.

We went back and fourth and about four beers later I had a “Eureka!” moment after glancing at the blank e-chalk board. It’s been dormant for two years now since smart phones became common in the bar.

The board used to be home to the world’s greatest sports-centered trivia. Dave thought it all up himself.

For example (answer at end):

But he became furious when instead of puzzling the answer out with their minds, idiots would just reach for their smart phones. So one day he simply stopped posting trivia.

I wish he’d have just banned smart phones rather than neglect the board, but he has a business to run. Moron money is as good as the rest of ours.

Then it hit me. The e-chalk board and I are both basically unemployed. We both spend hours in the bar doing nothing. It was a match made in bar heaven.

“How about I start posting a tweet of the week on the board? On the bottom I could put my website for an innocuous little promotion. What do you say?”

He thought it was a great idea! So I took the little grease pencil, plugged in the board’s lighting device and began to scribble my Moe Hawk tweet. I was very pleased. It would brighten the bar and I’d sneak in a little self-promotion.

So I was crestfallen the next day when I showed up and the board was blank.

“No one could read your sloppy writing,” Dave said. “I got tired of having to explain it the drunks. Don’t worry. I’ll put it up later. I’m used to vertical writing.”

And put it up he did. But not the way I would have.

As you can see above, he made me, not my tweet, the star and that’s a sure shark jumper for me. Early reaction has been positive, but I’m sure that won’t last.

See guys like us in bars like ours resent show offs. Here’s what I’d think if I wasn’t me.

“Geez, now Rodell’s here even when he’s not here. And he’s always here. He never shuts the hell up. He thinks he’s soooo funny. Bastard still owes me twenty bucks. He’s so full of himself. I wish Dave would bring trivia back. I’m really starting to hate Chris Rodell.”

And these are all my best buddies. We all like each other, but the truth is we’re all more interesting when our lives are in the crapper.

It’s more fun talking to a guy who’s getting divorced than hear a guy brag about his sporty trophy wife and their dimpled honor students.

So now I’m getting some attention for my book. I suspect that to continue. In fact, I hope to be sick of myself by Christmas.

Oh well, it was fun while it lasted.

“Happy Days” had five good, lucrative seasons at the top before it jumped the shark.

And I enjoyed my week.

Here’s a baker’s dozen of recent tweets, some of which may or may not earn inclusion on The Pond board:

• Monday morning reminder: the only time bitch, bitch, bitch turns into something positive is when you're running a dog grooming operation.

• It's a cruel irony that things that could most benefit from alcoholic diversion - church, work, parenting - require at least some sobriety.

• It would be cool if Mars rover has a bumper sticker that says "If you don't like Hank Williams you can kiss my..." w/ pic of a donkey.

• Perverted sheep farmers are bound to spend time on the lamb.

• As I approach my 50th birthday, I consider it one of my life's signature achievements that I've never dropped my phone in the toilet.

• Laura Bush says GW makes an easy target. Really? Then how come that Iraqi shoe-chucker missed him by, oh, what was it? A foot?

• As we know their positions, how about we decide presidential race by having Romney & Obama play "The Quiet Game." First to speak loses.