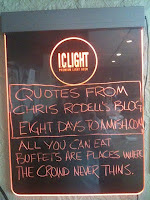 I’m going to now try and adhere to a monthly ritual of posting a twitter round-up at the end of the month (missed it by that much!).

This way if you check in and regularly and see a tweet round up, it can be a reminder for you that it’s time to flip the calendars for those of you who cling to that still-charming wall media.

I have two calendars in my office: one from the Pittsburgh zoo, the other of lovely Mississippi folk art I was given during a visit there.

I always think of calendars whenever the Rev. Harold Camping predicts the end of the world, which he does every six months or so. I always wonder if my last thought will, “Well, there goes six months of great calendar art.”

I tweeted @8days2amish 125 times since August 9th when I posted this story about The Pond making me the official bar twitterist. Reaction’s been much better than I’d hoped. People seem to be enjoying the tweets Dave selects so that’s good.

He’s yet to pick anything controversial enough to provoke anyone to want to fight me. But no one’s bought me a drink for the free giggles so I guess it’s sort of a wash.

• If I limited my conversations to only intelligent people, mine would be a very lonely existence and I’d have to quit talking to even myself

• People who say not owning a computer is old school are wrong. Today, even all the old schools have computers.

• Asked daughter, 6, if she'd had anything healthy to eat today. She said her gum was strawberry. I surrendered to her logic.

• Friend just sent $40 for two books directly to bar with instructions it be spent on beer. Saved me from rashly spending it on food for family.

• I take a back seat to no one when it comes to Stones fandom, but can’t fathom why when they see a red door they want to paint it black.

• Thanks to Rep. Akin, it now linguistically possible to have an illegitimate child who is the result of a legitimate rape.

• I strive to do things that would put proverbial feathers in my cap while avoiding at all costs wearing caps with feathers in them.

• Until there is a Jesus of Toledo it is religiously redundant to refer to Him as Jesus of Nazareth. Just say Jesus. We'll figure it out.

• One of these days when I’m bored I’m going to try to walk through an airport metal detector wearing nothing but a suit of armor.

• Grave diggers are some of the most down to earth people you'd ever want to meet.

• John Doe is a pseudonym for someone lost and unidentifiable, often for medical reasons. Someone who's lost and just stupid is a John D'oh!

• It’s a troubling paradox, but you’ll never be someone others consider happy until you cease caring what others think.

• Daughter, 6, asked what a gigabyte is. I later apologized for turning it into a massive tickle fest saying I thought she'd said giggle-bite.

• Feel bad for Eastwood. Would have been better if Mitt had invited Mel Gibson and told him the empty chair was Jewish.

And, to conclude, here’s one I liked from Morgan Freeman: “I hate the word homophobia. It's not a phobia. You are not afraid. You are an asshole.”