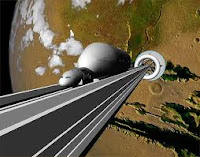 News that Seattle-based LiftPort is planning to construct moon elevators to floating space stations had me making a trip down elevator memory lane.

Or a trip up and down elevator memory lane, I should say.

We’ll get to the moon elevators, but first let me stray from that topic to discuss the noble device utterly incapable of straying even a inch in any non-vertical direction.

In some ways, the elevator is man’s most varied conveyance. In others, our least.

Some can travel 50 stories in the time it takes others to go three. Some have televisions; others are without even meager decoration. Some have glass walls and scenic views of places like Niagara Falls.

I did a 2003 story about Pittsburgh’s last human elevator operator. His elevator -- I was disappointed he didn’t give it a pet name like, oh, Elly? -- was more spacious and plush than my first apartment.

He rolled his eyes when I told him he was lucky to have job with such upward mobility. He'd heard 'em all.

His passengers loved him, said he really brightened their days.

I’m surprised innovative companies don’t hire elevator operators to loosen up what is one of our most poisonous interpersonal atmospheres.

Funerals are livelier than most elevator rides. No one jokes. No one makes eye contact. They just enter, do an immediate about-face and begin staring at the numbers above the doors the way gamblers stare a high stakes horse races.

I will on occasion defy convention and startle fellow passengers by facing the rear wall for the entire ride. It’s very unsettling to some, almost like they’re flying commercial next to a devout Muslim.

I almost always wind up exiting on the wrong floor, but I’m never in so much of a hurry that taking the steps a few flights is a bother and it’s fun to try and guess how close I come to the floor I need, adding a “Price is Right!” element to something typically mundane.

I guess my all-time favorite elevator was the one at the 7-story College Inn in Athens, Ohio, where I attended Ohio University. I lived on the top floor. What made it cool was The Nickelodeon, the best bar in town, was in the basement and I tended bar there.

I remember one time a girl to whom I felt no carnal attraction offered to drive me home. I told her her car wouldn’t fit in the elevator.

This one had a dual stop/start button that if you timed it just right you express the lift right past every floor.

The elevator would stop when summoned, signaling impatient occupants like myself to lean hard on the stop button. This would cause an emergency bell to ring. The sound of the bell meant you immediately needed to yank the start button for the elevator would zoom right past the floor.

Infuriated residents would pound on the door and scream profanities at those of us inside.

Some of the most awkward moments of my life occurred in that elevator when I mis-timed my effort and the door would open and a student would enter to see me standing there pulling on the button for dear life.

The glaring hatred I felt was palpable. To this day, I don’t know how I escaped multiple beatings.

Another recollection: Elevator sensors were incapable of detecting empty beer bottles lodged between the center-closing doors. The doors would shut and the elevator would operate as normal with the beer bottle captive in the inner doors.

We’d be there in the basement hearing the bottle make escalating clanging sounds on each floor as we wagered how high it would get before shattering.

I remember winning $20 on a durable Genesee Cream Ale bottle that went six floors before breaking into a thousand tiny pieces that musically rained down the shaft for the next 30 seconds.

I doubt that will be possible with the proposed moon elevator. The idea is to build tethered space platforms (first lunar, then earth) that make galactic exploration more feasible, but I think it’ll most be used by leaping daredevils intent on having their bloody demises filmed for YouTube posterity.

An outer space elevator seems to offer the choice of dying of either boredom or hypoxic asphyxiation.

The stories don’t say, but I have to believe the ride would seem to take forever.

And I’m sure I’d go crazy standing there aboard what is essentially a two-story elevator waiting for the “EARTH” light to darken and the “SPACE” one to illuminate.