When Sultans get "Occupied" 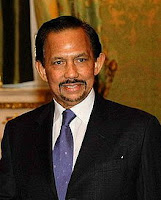 I suspect one of the reasons I can’t land my opinion pieces in more prominent media is I’m not emphatic enough.
To my critical detriment, I usually see both sides of every issue and base my decision on the opinion on whatever the last person I hear had to say.
So a guy like me is going to struggle to comprehend the Occupy Wall Street movement that started in New York and is sweeping the country, which will certainly need swept when it’s done.
I need issues brought into stark relief for me to figure out what the commotion’s all about.
Happily, Thursday gave me an edifying professional opportunity to understand.
This one pits 250 laid off hotel service employees against the Sultan of Brunei.
The latter’s one of those names I’ve never really delved into, but just instinctively understood meant vast wealth.
How vast? He’s worth 36 times more than the Queen of England. He’s the recipient of the inherited riches of 600-years of unbroken monarchy of the Southeast Asian nation on the island of Borneo.
His official name is General Haji Sir Hassan al-Bolkiah Mu’zzaddin Waddaulah, and if you think he has a lot of names you should see his garage.
Wikipedia says he owns 531 Mercedes-Benzes, 367 Ferraris, 362 Bentleys, 185 BMSs, 177 Jaguars, 160 Porsches, 130 Rolls-Royces, and 20 Lamborghinis for a total of 1,932 cars.
The numbers are precise, I guess, because he owns the Brunei Department of Motor Vehicles, too. He’s listed as the nation’s prime minister, its minister of finance and defense, its armed forces supreme commander, and police inspector general.
He’s to Brunei what Jerry Jones is to the Dallas Cowboys. He runs the whole shebang.

His opulent existence is instructive in today’s Occupy debate. He’s the kind of guy that 99 percent of the lordly 1 percent resent because he’s just got so much dough.
Life always figures out a way to give even guys like Trump someone to envy.
He came into my sphere of knowledge yesterday while I was doing this travel story that just popped up on msnbc.com.
It’s about the reopening of the historic Hotel Bel-Air, the luxurious enclave of Hollywood A-listers from Marilyn Monroe to Angelina Jolie. Oprah had her 50th birthday party there.
The hotel owner is Mr. Hassan al-Bolkiah Mu’zz-, oh, hell -- the sultan owns it.
Understand, my whole motivation for writing a story like this is to have it done on deadline, be pleasing to editors and readers and to have hotel PR folks say, gee, you seem like a friendly fellow. Why don’t you come and stay with us and see the place for yourself?
Now, for ethical reasons, I’d have to decline the offer, but it’s a comfort to know if Val ever changes the locks I could spend a night or two at one of America’s finest hotels and perhaps play footsie with the likes of Lindsay Lohan until Val cools off.
During my research I learned the hotel fired 250 union workers and timed the renovation to the expiration of the union contract in 2009.
The old employees are hoping today’s stars and other prospective guests act like Claude Rains in the 1933 classic, “The Invisible Man.”
They don’t want to see anybody there.
“We’re asking that no one eats, meets or sleeps at the Hotel Bel-Air until these employees are rehired,” says Leigh Shelton of Unite Here Local 11, representing 20,000 Southern California hospitality workers. Aligned with Occupy L.A., they’re expecting 500 protesters.
The newly renovated boutique hotel has 113 rooms.
The sultan lives in 2,152,782 square-foot palace with 290 bathrooms. If I lived there I’d have a party, would invite precisely 290 friends and assign them each their own bathroom. I think guests would enjoy that.
So this is where my understanding of the Occupy Wall Street movement achieves clarity.
It’s all just so unfair.
To his credit, the sultan bestows free health care to each of his 401,000 subjects, lousy socialist.
The union workers are asking they be given priority rehiring opportunities and fair compensation for their lost wages. The sultan could erase this public relations fiasco with what he probably considers walking around money.
Here’s what I’d do as arbitrator:
I’d order the sultan to allow each of the 250 unjustly fired employees to live for free in his bathrooms until they can find other work.
I’m sure they’re all very commodious and he’d still have 40 bathrooms all for himself.