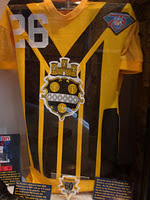 Posting four or five fresh blogs a week is making me less and less reluctant about trotting out some oldies, but goodies on days when I don't feel like doing a thing.
My lazy meters are all flashing red today. So here's a still-relevant post from December 2009 originally titled, "NFL not rich enough: Needs 'Throwforward jerseys.'"
Have a wonderful Sunday! Please check out the blog Monday morning when I'm planning on writing a post featuring the word "sockdologizing." And if that doesn't make you look forward to starting out the new week, nothing will!
My life curse is that I, a man who can’t even earn a dime for himself, sees how the already filthy rich can grab even more loot.
Take this past weekend. I spent $75 to attend a professional football game between my hometown Pittsburgh Steelers and the Baltimore Ravens.

Excellent pieces. Keep posting such kind of information on your blog. I really impressed by your blog.