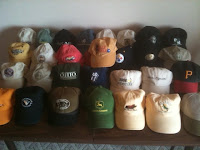 I admire mothers because the primary motivation for much of their existence is the love of a child. Truly, a mother’s love is one of the most awesome forces in nature.

Sure, many fathers feel that way, too. We’re rah-rah for nurturing, bonding and all the rest of that blahbidy, blahbidy, blah crap.

But it’s dawned on me that men might be superior to women in one regard: we’re imbued with a selflessness that gives us the capacity to love more than just our children.

And I, of course, mean in addition to loving ourselves.

We love our ball caps.

I can tell you exactly where I was and what I was feeling the moment I decided to pull the trigger on a ball cap purchase. I can tell you what I shot golfing the scorching day that white saline line started creeping up the bill.

Unlike my daughters, my hats have never told their friends I’m weird, smell bad, or done anything to make me look stupid -- other than resting atop atop my head and that’s an entirely passive act so I don’t begrudge the hat for that.

I understand women enjoy shoes, purses and dresses, but I think it’s deeper with men and hats. Go ahead and assume it’s only seems deeper because we’re more shallow.

I became stuck on this hats-as-children analogy when I began to realize I was becoming the Octomom of hats.

Hats have been spilling out of closets, from under car seats and off shelves whenever my head went.

I counted and, damn, if I didn’t have one hat for every day of the month: 31 hats.

I figured I needed to ditch a bunch of hats or brainstorm a controversial medical procedure that would leave me with 30 additional heads.

And think for a moment what I’d be like with 31 heads. If done properly, I could wind up 31 times more intelligent than I am now. Or else my current brain power would be divvied up among the number leaving me intellectually diminished, besides really freaky.

Either way, the development would probably thrill my barber.

But I took the easy way out and cut the herd in half. I spent the morning strolling down memory lane and conducting what amounted to the Sophie’s Choice of headgear.

I started with the beige brigade: I had nine beige hats and always keep a couple in the car. They’re good because they’re very neutral and don’t draw attention to my face when it’s suffering from the effects of hangover.

But nine? Five had to go.

Getting rid of one of my late father’s Olde Stonewall golf hats seemed like such a betrayal. But I have to be honest: it looked stupid on the old man and I’m sure it looks stupid on me. It has way too much of what an old friend of mine used to call “Fuddage,” the gap between the head and the inner hat ceiling. Plus, it’s all sweat stained. To hell with it.

I ditched a Rolling Stones tongue logo hat that’s always been special to me because it reminds me of a fun prank. I had the hat sent to my 8-year-old Josie and in the personalized message part had them write: “Dear Josie, Me and the band want your Dad to have this rockin’ hat for Father’s Day. Be sure to tell him we all love his blog! Rock on, kid! From Mick Jagger and The Rolling Stones.” The hat gift from a band she’d seen perform at the Super Bowl seemed to impress her and had her looking at me more reverentially. Lasted about 20 minutes.

Took me two hours this morning to cut the hat count in half. Then I spent the whole afternoon giving pep talks to each hat like the career councilors do with employees moments before security shoves them out the door.

Now it’s off to the Salvation Army with the whole bunch.

The task was emotionally grueling, but gives me confidence that one day I’ll be capable of taking on some of life’s other challenges.

But it’ll be years from now before I’m ready to tackle the T-shirts.