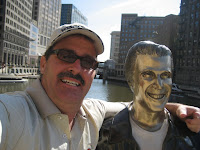 This, my favorite sports season of the year, is being sullied by love. The four remaining baseball teams representing four cities are each appealing in their own ways.

I have no one to hate.

Despite signs of promise, the The Pittsburgh Pirates for the 19th year in a row have failed to make the playoffs (nostalgia note: it was 51 years ago today that Bucco Bill Mazeroski hit the most famous home run in baseball history to beat the N.Y. Yankees in the World Series!).

So without a home team to root for, I need an artificial reason to cheer for a city that is deserving of riotous celebrations and property damage.

It would be simpler for me if the Boston Red Sox and the Chicago Cubs were contending because I could reflexively root for their opponents.

The baseball playoffs are down to the St. Louis Cardinals vs. the Milwaukee Brewers, and the Detroit Tigers vs. the Texas Rangers. Let’s break ‘em down:

One of my favorite literary characters, Capt. Augustus McCrae was a Texas Ranger in "Lonesome Dove," so they have that going for them. Plus, most of my favorite music has Texas roots. Joe Ely, Steve Earle, Delbert McClinton, Robert Earl Keen, Ray Wylie Hubbard are all Texas true. But despite his preppy upbringings that always makes me suspect he’s a closet Red Sox fan, so is George W. Bush. If Texas wins, it’ll make Bush happy, so they’re out.

They’re playing the Detroit Tigers. What American doesn’t root for Detroit? Detroit welcomed my fellow Steeler fans with open arms when it hosted our 2006 Super Bowl victory. The retro ballpark, which I’ve been to, is a dandy. If they beat the Rangers, it’s likely they’ll have Bob Seger sing the national anthem and I love Seger. Plus, them winning keeps alive my opportunity to tell the story about how Detroit used represent the USA in the world’s only international tug of war. In what should inspire an Olympic competition, they used to string a stout mile-long rope across the Detroit River between the city and neighboring Windsor. If Detroit wins I promise to share my promotional efforts to organize a trans-Atlantic tug-of-war between America and Europe. Go Detroit!

St. Louis is one of the few great American cities I’ve never been to. But my very good friend, Angelo Cammerata has. He’s the world’s longest serving bartender and the folks at Anheuser-Busch rolled out the red carpet for him 2007. They gave him box seats at a Cardinal game and introduced him to the roaring crowd on the Jumbotron. I like it when a city showers the people I care about with cheer and warmth.

But I like it even better when they do that with me. And that’s what happened in Milwaukee. In the fall of 2008, the whole state of Wisconsin treated me like I was Big Cheese -- and that’s something that really matters there. I was there on a travel story (recap here). Over six nights I played golf at all the state’s finest courses (Whistling Straits and Erin Hills) and was wined and dined at all their top restaurants. On my own, I found an outstanding Milwaukee bar that treated me so well I actually considered relocating my family just to be within stumbling distance. It’s Sobelmans. They didn’t even know I was a travel writer and thus felt no unnatural obligation to shower me with warmth and freebies. They were just naturally nice. If I’m ever within 250 miles of Sobelmans I’m automatically going back. Milwaukee also has one of my favorite offbeat tourist attractions, the Bronz Fonz. So I want Milwaukee to beat the Cardinals.

That pits Milwaukee vs. Detroit in my World Series.

This upsets my friends who hate the Brewers for beating up on the Pirates, but I have to root for Milwaukee to win it all. I just met so many friendly people in Wisconsin and had so much free, fine fun. Everyone was just so nice.

So take note, Boston: I can be bought. Prepare the finest hotels, alert the golf courses and start the lobster pots a boilin’.

Chicago, don’t even bother. I think we all need to hang onto at least a little hate.

I wouldn’t want people to start confusing me with Wisconsin.