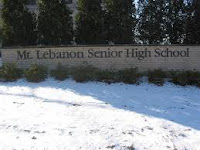 My daughter, 5, complains full-day kindergarten is a drag. She wondered if there was anything she could do to make it less boring?

I nearly blurted out the perfect solution:

Because that’s when it all gets really, really interesting.

The Mt. Lebanon High School class of ’81 had its 30th reunion Saturday night at PNC Park in Pittsburgh. That meant nearly 200 of us were tingling with recollections of the emotional crucible from when boys and girls become biologically capable of conceiving children while still acting like them.

The 30th reunion is where a bunch of 48 year olds stand around congratulating one another on how fabulous we all look secretly relieved there are no honest 18 year olds to rebut the compliments.

High school memories are indelible. If you’re kind to someone they remember it forever. If you’ve ever been mean to someone, it’s a nasty grudge they’ll forever bear.

Truth of the latter was slammed home to me at the last reunion I attended.

I was sitting at the bar by myself when a muscular gear head with cut-off sleeves got in my face and said, “I remember you. You always thought you were better than me. Well, what about now, Mr. Fancy? Still think you’re better than me?”

I gave him a good long look and thought, yeah, I am better than you.

Because this wasn’t my reunion and I’d never seen the guy before in my life.

It was my wife’s reunion. She wanted me to attend to show all the mean girls she’d married a presentable guy who didn’t eat things like salad and pasta with his fingers (practiced for weeks).

Once that mission was accomplished, she immediately ditched me to flirt with old flames and I retired to the cocoon-like comfort of the bar.

Even after the guy’s nervous wife persuaded him I was innocent, I’m sure the guy still wanted to kill me. He was one of those misanthropes who instinctively hate handsome men like me with nice smiles like mine, but calculated that was insufficient reason to assault a stranger.

The episode convinced me bringing a spouse to a reunion was a bad idea.

I wouldn’t want Val to go through what she made me go through -- and I’m referring to confrontations with stupid bullies and not being abandoned in a bar, my natural habitat.

I didn’t want my darling wife there in case one of the 300 or so girls I spent puberty dreaming about came up to me and said she’d always had a crush on me and, hey, would I mind sneaking away to behind the Pirate dugout so we could make out?

Sadly, this didn’t happen and I blame a flaw of the reunion dynamic.

There’s no forced mingling. Some of the girls who may have been eager to make out with me might have been ensnared in long bouts of glibberish.

Glibberish is my word for pointless party chatter between two people who’d rather be talking to anyone else.

The reunion’s first hour should be like speed dating. Everyone in two long lines has to say hello to one another. A bell rings after four minutes and you move on to the next old classmate.

Then after an hour of this you can decide which people have evolved into worthwhile adults and which ones must be avoided like algebra.

I was fortunate to have had about five really soulful conversations and they were like Christmas ornaments, something to cherish.

There was some glibberish, but I had a ball.

I’ve been so fortunate with friendships throughout my life. I guess it’s because so much of what happens after high school is so repressive and serious and I’m not.

People seem drawn to that, at least all the people I’ve always liked.

It for me became the perfect reunion in the early morning as I was walking through downtown Pittsburgh back to my car and two beautiful women came up and proposed something more illicit than bleacher kisses.

Sure, they were hookers. I had the cash and with proper motivation can be a savvy haggler. But I declined because their proposition had already given my night a happy ending.

Thanks to them, I’ll be forever able to remember my 30th high school reunion as the night everyone said I looked great and two girls pestered me for sex.