A sexy ode to Heinz 57 Ketchup 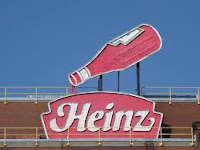 So I had this news clip on my desk for about the last three months. I’d pick it up and look at it again and again. It seemed too trivial to indulge with a full post, yet too fascinating to dispense with a tweet.

But I can’t shake its import. I must share.

Slower than thugs. Now it's in my head.

Ketchup - has to be Heinz and only on french fries.