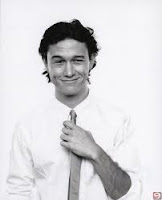 Val and I and just caught the matinee of “50/50,” starring one of my four favorite actors, Joseph Gordon-Levitt. The other three are John Lithgow, French Stewart and Kristen Johnson.

That’s right. They’re the four stars of the uproarious “3rd Rock From The Sun” that ran on NBC from 1996-2002. Read all about my obsession with it here.

About five years ago when I was on a lucrative run of work, I decided on a crazy splurge.

If you’re guessing sports car, golf clubs or Vegas hooker you overestimate my ability to fund a crazy splurge.

No, I went and plunked down $108 for the complete DVD catalogue of the entire series. I intend to leave it as heirloom entertainment to my daughters and will know I’ve raised them well if they become estranged over who gets caretaker privileges.

Each cast member -- including Jane Curtain and Wayne “Newman!” Knight -- is uniformly excellent.

And none of the stars have done anything post-show to diminish my affections.

In fact, Johnston, a stunning, leggy blonde, just upped my admiration ante by getting in a fight on a commercial flight. Normally, I’d be chagrined at such mopish behavior but this was perfect because the fight was with . . .

Yes, she made tabloid headlines for getting into a shouting match with Nadya Suleman over having to share aisle time with her sprawling herd of runny-nosed rabble.

As great as each is, I think we’re witnessing something entirely different with Gordon-Levitt. He’s becoming one of our finest and most appealing actors. Starting with a role in Robert Redford’s 1992 hit “A River Runs Through It,” it seems like he’s been groomed for acting greatness.

His farcical acting in “3rd Rock” is as laugh-out-loud as funny as anything I’ve ever seen. He was great in “50/50,” in which he plays a 20-something character devastated by a cancer diagnosis.

We loved him in “500 Days of Summer,” and I’m looking forward to seeing him in the new Batman movie, “The Dark Knight Rises,” filmed here in Pittsburgh.

And now it’s like the world is discovering what “3rd Rock” fans have always known: This kid is special.

Confirmation for me happened a couple weeks ago when I read Gordon-Levitt is dating the beautiful and very cool Scarlett Johansson.

I’m rooting for him because actors interesting enough to make me want to see them in anything are becoming rare. They start out strong and make bad decisions or let their personal life so clutter their craft I find them unwatchable.

Here are some current and recent movies and why I will or will not pay to see them:

• J. Edgar -- Heck, I’ll see it on the day it opens. As great as Clint Eastwood was for his first 50 years, his second act is even more compelling with movies like “Gran Torino” and “Million Dollar Baby.” This one stars Leo DiCaprio, our best actors and one who hasn’t complicated my viewing enjoyment with off-screen shenanigans. Heck, I know more about his green initiatives than who he’s dating.

• Moneyball -- I’m leaning nope. Brad Pitt play a baseball general manager who helped revolutionize the way players are evaluated. But Pitt’s flamboyant personal life is making him too distracting to enjoy. Plus, I’m always disappointed in baseball movies ever since “The Bad News Bears.” It remains the “Gone With the Wind” of baseball flicks.

• Tower Heist -- Oh, how I hope this gets gangbuster reviews. I’m a sucker for funny caper movies. But Ben Stiller’s becoming hit and miss. For every “Meet The Parents” or “Night at the Museum” I love, there’s a “Meet The Fockers II, III and IV,” or “Another Night At The Museum.” I can only conclude his motivated more by greed than legacy. And Eddie Murphy’s probably made more bad movies than anyone else on the planet. But the plot looks irresistible. It looks like a rip-off of the short-lived, but terrific 2007 series “Knights of Prosperity” about a bumbling gang of thieves intent on burglarizing Mick Jagger and starring -- Mick Jagger! “Tower Heist” looks promising, but if Rotten Tomatoes comes back with less than 70 percent favorable, I’m staying home.

• Anonymous -- I’ve for years tried to promote the falsehood that historical documents prove William Shakespeare started out as a 16th century tabloid writer who did stories about towns saved by giant balls of twine and how puppy loved turned an 11-year-old peasant into a petty thief. I did so because I thought it would reflect well on me, a 20th century tabloid writer who once did the exact same stories. I say I’ll see it, but probably won’t unless word of mouth is gangbuster.

• The Rum Diary -- This looks like good alcoholic fun. I like seeing movies that make me want to rush off on a really wild bender. And I do like Johnny Depp.

• Puss in Boots -- One of my favorite hangover cures is seeing a really good kid matinee with my little cuddlers. It’s like taking a nap with your eyes open. But I absolutely hated all the Shrek movies. If the kids want to see this spin-off, they’ll have to have mommy take them. No hangover’s that bad.

• Real Steel -- Looks unwatchable. We’ve reached a stage where special effects are no longer special. Here’s an idea: Let’s go back to putting the premium of telling a coherent story.

• Dolphin Tale -- The kids loved this so much with Val they want me to see it with them so you betcha. Plus, the cast includes Kris Kristofferson so it’ll give me an opportunity to brainwash them on the way home with songs from a performer I’ve always admired. My favorite of his? “To Beat the Devil.”

• The Departed -- I have to mention this because we just stayed up till 1 p.m. last night re-watching this 2006 Martin Scorsese movie. Based on the duplicitous criminal life of recently nabbed Boston mobster Whitey Bulger, it won a host of Oscars. It includes some of the finest acting by some of our finest actors. It stars Jack Nicholson, DiCaprio, Matt Damon, Martin Sheen, Alec Baldwin and Vera Farmiga all at the top of their games.

Footloose -- I never saw the first one and won’t see this one. But I found out years later that John Lithgow played the maniacal anti-rock ‘n’ roll preacher in the first one and parodies the role in the “3rd Rock” season 3 show “Tricky Dick,” in which Tommy joins a grunge band. Rather than see either of them, I think I’ll pick a night and watch all of season 3 all over again!

Boyfriend saw Moneyball and liked it quite a bit. He's a big baseball fan, though, so it's no wonder.

Hi Lexcade. Great to hear from you! I probably should see Moneyball. I'm hearing much the same as your boyfriend says from other fans.

And I agree with you on JGL. He's just cool. He was just wonderful on 3rd Rock.

Thanks for checking in. Hope you're doing well!