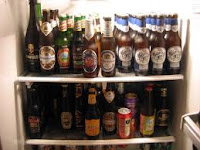 Of all our national extravagances, the beer refrigerator might seem to primitives the most lavish.

It’s a wild guess, but there might be as many as a billion sweaty equatorials on the planet who’ve never even seen ice.

Television they might be able to comprehend as a box full of miniature people whose black magic is interrupted every eight minutes by commercials that remind them of what the tribal medicine men would say if he were sitting naked in a clawed foot bathtub.

But for a world of hunters and gatherers, the ability to reach into a big white box and pull out a meal would be nirvana.

But the beer fridge takes it all a step further.

The majority of the world has seen and understands refrigeration, but of those only Americans are apt to consider as essential the need for a second refrigerator exclusively for beer.

This occurred to me about a month ago when our main refrigerator crapped out. It came with the house about five years ago and we greeted its demise the same as if it were a cat that had outlived our love.

To hell with it.

We always buy our appliances at a true Main Street mom ‘n’ pop shop. It may be a little pricier but you can’t beat the service and every time we buy a big new appliance from them we’re raising our middle fingers to all the big box stores that are killing small towns like mine.

They have sales that make it worth the wait.

So for the past five weeks we’ve been a one-fridge family. We’ve had to endure the hardships of walking up and down the stairs for food. Sure, it’s not like we’ve had to take to the woods to kill something frisky in order to eat, but it hasn’t been easy.

And to make room, I’ve had to move all my beer down to my office beer refrigerator.

This is like a dorm fridge. Its entire contents right now are 21 Duquesne beers, eight Leinenkugels, a stray Bud Light, a bottle of ValuTime Italian salad dressing and a small jar of capers.

I often have salads in the office and will on occasion buy a breakfast bagel, some smoked salmon and cream cheese and garnish the sandwich with tasty capers.

What I rarely have here or at home is beer.

I’ll drink a beer or two in the summer after sweaty yard work or while I’m tending to the grill, but I’m more apt to refresh at night with a glass of bourbon on ice.

And I rarely sip even one beer alone at the office, preferring to go downstairs and guzzle it in the company of multiple inebriates.

So why the need for two fridges dedicated to brew?

I guess it’s all because I want to be ready to party at a moment’s notice. I think the mentality’s a leftover from my college days.

College was a place where even idiots learn it’s always a good idea to suggest whenever anyone stopped by, “Say, let’s have a beer!”

Life’s grim. Dance whenever you hear the music.

I’m always encouraging impromptu parties here at the office. I want anyone feeling glum to know they can knock on my door and be greeted with cheer and frosty reminders sobriety’s overrated.

But why a beer fridge at home?

The last thing I’d expect or want is any of my alcoholic friends to show up needing my support.

At the office, they’re interrupting my questionable ability to earn a living. But at home they might interrupt “Survivor.” That’s unacceptable.

What’s odd is how when the fridge broke neither my wife nor I debated for even a second about the need for another one.

The foolhardiness of the mindset is enough to drive a man to drink.

Good thing in America I’m never more than a few steps from an ice cold brew.

mmmmmm BEER!!!! Time to raid the Fridge....We need to crack open a few....Beaver

Yes! Beers with the Beav! It would be great to see you, man. Howard's talking about swinging through Athens in Januaray. I'll keep you posted. Hope you're doing well, man.

Thanks for share this article, it very useful for me.
I look forward to your new article.
find more