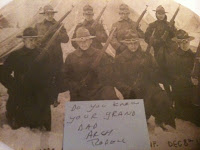 It’s one of maybe six pictures I have of the warrior-poet I hope to one day embrace  in heaven.

I wonder if I have any soul left to lose.
Posted by Chris Rodell at 9:12 AM

Wonderful. A beautiful creation on many levels.

Thank you, Bob! Good to be in touch again.