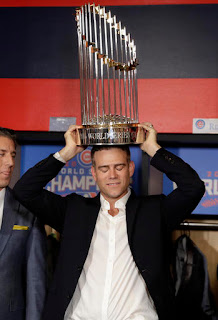 Something happened late last night that convinced me to do something I never dreamed I’d ever do.

I’m not voting for Hillary.

What are my plans?

If he can in just 12 years vanquish a collective 188 years of World Series droughts between the Boston Red Sox and the Chicago Cubs he can make ANYTHING great again.

Epstein, today 42, was just 28 in 2002 when the Red Sox hired him to be their general manager. Two years later the perennially cursed Sox won their first World Series in 86 years. Three years later, he won them another.

Inexplicably, the Sox let him go in 2011 (haven’t won since) and he was snapped up by the Cubs. All he did for them was end the longest and most fabled drought in sports history, the 108-year folly of the Cubs.

So this one man has now won two more world championships than all the vaunted New York Yankees teams have won this century.

Him negotiating baseball salaries seems a gross misapplication of genius.

Can you imagine what a man like that could do if he sunk his teeth into climate change?

Or health care? EpiPens would be cheaper than Tootsie Rolls.

Reporters last night were asking him if he thought the Cubs could repeat.

Idiots. A man this great shouldn’t be troubled with such piddling questions.

Someone should ask him where we all go when we die. He knows, I’m sure. It’s just no one’s ever bothered to ask.

I won’t say last night was the greatest baseball game ever. That honor goes to Game 7 of the 1960 Pittsburgh Pirates versus the New York Yankees.

But given the circumstances, it was the greatest baseball event I’ve ever seen.

The indelible moment for me was the goofy grin Kris Bryant had on his face as the last out dribbled into his glove. It was a tricky play and given him being a Cub immortal catastrophe could have ensued, but his joy and skill were transcendent.

And I could sense the entire country for the first time in years felt simultaneously good, happy. Glad to be alive.

Well, every one but the Indians and all their pitiful fans.

The national reaction bolsters my contention that anytime you feel like talking about politics you should instead talk about baseball.

Talk about Roberto Clemente, Satchel Paige, Babe Ruth and Jackie Robinson. Suggest that the problem with baseball isn’t the games are too long; they’re not long enough.

And talk about the 2016 Chicago Cubs, a team for the ages.

They’ve given the whole country a happy lift when we’re all feeling poisoned by politics.

That Cub-love is an about face coming from me. Remember, it was I who wrote just last week in the “Cubs will lose” link below how much I hated them.

To summarize, I said they’d lose because of Steve Bartman and because of this one evil jackass with whom I nearly came to blows at a Pirate game back in 2008.

I put my soul-devouring hatred for this one jerk above all my Chicago friends, my fond memories of my visits there, and my warm regard for things like Olde Style beer and artery clogging deep dish pizza.

It diminished me. Our hatreds always do.

I’ll admit there were times I even dreamed he was dead.

He was an older dude with a cranky disposition. I imagined him choking on a sausage or being the victim of justifiable homicide over some neighbor hedge dispute.

But this morning even the mists of that hatred have been blown away in the wake of an historic victory.

And I now realize even if someone did justifiably kill that miserable bastard, Theo Epstein could have resurrected him for the Cubbie celebration.

After what he did for the entire franchise, bringing back from the dead just one measly Cub fan would be a piece of cake.

The man Maz turned into a Communist