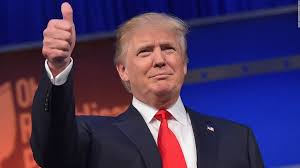 I can’t tell today whether America needs a marriage counselor or a divorce attorney.

Can you use campaign contributions for bail money?

Locking up Hillary Clinton was a primal mantra of Donald Trump’s supporters. They felt the way about seeing that come to pass the way I felt about sensible legislation to address climate change.

Trump promised he would. Was he kidding?

I know I’d be pissed off if my candidate didn’t follow through on a foundational pledge like that.

The two already made nice in conciliatory calls late last night, and Trump’s accepted Obama’s gracious invitation to meet at what may now, given all the KKK endorsements, be regarded as the White Power House.

I have to think Ted Nugent and his fans are rooting for Trump to do to the Obamas something ranging from rude to felonious. Will Trump at least ask, “C’mon, between you and me, you were born in Kenya, right?”

Is an election only rigged when you lose?

Hillary won the popular vote (that makes it six out of the last seven presidential elections clear back to 1994 when that’s happened for the Democratic nominee). Seems rigged to me.

Who’ll be the ugliest person on his cabinet?

Can an ugly person be competent enough for Trump to tolerate seeing her face for hours a week? That assumes, of course, he’ll even have a cabinet and not just turn the whole country over to his kin.

If Hillary is really the anti-Christ, what’s her next move?

Would it be sufficiently Satanic if she went to help out in Haiti? I hear Haiti is hell on earth. I’d suggest she become commissioner of the NFL, but that office already has an anti-Christ.

And if she is the anti-Christ, does that mean Trump is the messiah?

This is where things get tricky. Without offering any specifics, he’s set himself up as our savior, a man who can take awful things and make them marvelous.

Take my kid’s school bus driver. She’s sweet as sunshine. This morning she had her Trump hat on and we spent our brief chat enthusing about the results.

“I stayed up all night,” she said. “I’m so happy. America made history last night.”

I told her I voted for Hillary and that the only thing offsetting my misery was the understanding that good-hearted people like her are happy.

She said her out-of-work husband is a coal miner. She’s confident in her belief Trump’s policies will soon lead to stable work. I resisted the urge to say I hope it’s something he really digs.

I wonder how she’ll feel if it doesn’t happen in six months or a year.

I wonder if the ugliness will end or if it’s just beginning.

We’re all suffering from Facebook toxicity. We’ve seen sides to one another that should have best been kept hidden.

Our virtual realities have bled into our actual ones. Many of us have set terrible examples for our children.

I was just last night blamed for the four deaths in Benghazi. A stiff finger poked into my chest for hateful emphasis.

Really? Do Trump supporters want to be held personally accountable for anything bad that might — just might — happen over the next four years? Do I blame boneheaded George Bush supporters for cheerleading the Iraq War?

You’re goddamned right I do.

I just have the civility to keep it to myself.

I think I’m like many voters in that I’m progressive on social issues, conservative on foreign affairs and situationally sensible about many other matters.

Want to label me?

Call me an elitist.

I believe in manners, education, history, tolerance and having chummy foreign allies in good times and bad. I believe in diversity, optimism and compassion and extending the benefit of the doubt to those with whom I disagree.

I fear my kind of elitism will now be forever ridiculed

It’s taken 238 years, but our national bully pulpit finally has an actual bully.

My fear is America is about to become it.