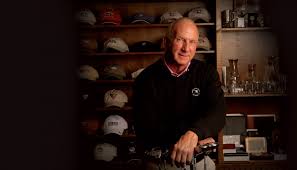 Our friend Jerry was simultaneously the worst golfer and the sweetest guy I’ve ever known.

Of course, all the obituaries will note this splendidly preposterous golfer was the younger brother of Arnold Palmer, one of the greatest golfers in history.

I’d argue that Jerry was the only person on the planet who loved golf more than Arnold.

Arnold’s love of golf left him richly rewarded. From a young age, his achievements nurtured his love. Golf bestowed Arnold with wealth, adulation and historic renown that will forever endure.

If golf is a mistress, she succumbed to Arnold.

She ridiculed Jerry, taunted his courtship, denied her comely affections.

He didn’t care. He never stopped loving her.

There’s real beauty in that.

Golfers love the older brother but, man, most of us can really relate to the younger one.

If golf was unkind to him, everyone who knew him — and he knew everyone — made up for it.

It was just so easy being nice to Jerry. The brother of The King was a real prince.

I’d known him about 15 years. I profiled him for Kingdom Magazine in 2008 (link below).

The thrust of the article was, gee, what’s it like growing up and living in the shadow of one of the world’s most famous and beloved men? There are plenty of cases of resentful siblings who let residual fame warp them into dysfunction.

It was never a problem with Jerry.

C’mon, I asked, wasn’t being Arnold’s brother ever a burden?

“Honestly, I can’t think of a single burden,” he said. “I enjoy my life. I have two wonderful children, a job I love and I have one of the world’s biggest celebrities for a big brother and the celebrity just happens to be a great guy in every way.”

We talked for 90 minutes. Then he took me to lunch, we played 18 holes of golf and enjoyed cocktails long into the night.

I’m happy now that Jerry had many, many days that went exactly like that.

While he was always sunny, the memory of him I’ll carry longest is one of meteorological misery.

For years, me, Jerry, his insurance agent and a state cop — his friendships were delightfully eclectic — would drive to Stonewall Resort in Roanoake, West Virginia, for golf and camaraderie. It was our year-end custom.

He’s played at many of the finest courses in the world, but always said Stonewall was one of his favorites.

But on this day the forecast was discouraging. Day-long rains, bitter gusts, and descending temperatures — I argued we skip in favor of what I was certain would be a long, boozy lunch near a roaring fire

Jerry wouldn’t hear of it. He was determined to uphold our tradition.

I don’t think I’ve ever been more miserable on a golf course. After one hole, we were drenched, chilled to the bone.

I remember at the 9th hole we had what you might consider a golfer’s intervention.

“Jerry this is nuts.”

Jerry wouldn’t hear of it: “I really think the weather’s going to change. And why would we quit when we’re all having so much fun?”

He was correct. The weather did change.

It got even worse.

And he looked like the happiest man in the world.

Later at dinner, he jabbed us for having wanted to quit.

It was. Just marvelous.

I imagine him in heaven right now, the sweet, smiling guy who looks like he’s been there all along.

Brothers to a tee: Arnold and Jerry Palmer (Kingdom)

Jerry was a fine man, gracious and friendly. I was principal at Latrobe Jr High where Jerry's kids Deke and Amanda attended. They like their father had wonderful dispositions and healthy senses of humor. No doubt that they were raised with the same values that were common to Jerry. He would come to open house annually and made a point to always exchange greetings and best wishes. He deserved more years than was allotted to him. My sincere condolences go out to Deke, Amanda and to his extended family.

Thank you, John, for sharing your recollections. I can't imagine him being anything other than just what you described.

And thanks for having been a GLSD principal! We're very proud of the education and upbringing our children are receiving here in Latrobe.