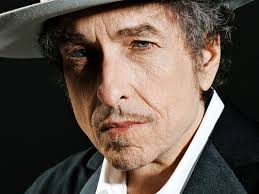 My favorite Bob Dylan story is about the time he was arrested in Long Branch, N.J.

If you think he was arrested protesting some social injustice, you’re mistaken.

The man who wrote dozens of indelible protest songs has never to my knowledge deigned to ever protest any social injustice.

No, Dylan, was arrested for vagrancy. (Note: it wasn’t an official arrest, but he was detained and given a ride in the back of the squad car. That’s an arrest to me).

It was July 23, 2009. Dylan at the time was 68. The officer involved was Kristie Buble — and, yes, it’s pronounced “Bubble.” I didn’t see her age listed, but I’m inferring she was of the N-Sync generation.

Officer Buble responded to a 911 call of a confused-looking old man wandering the streets in the rain and looking in windows of a house at 7 1/2 West End Court, an address recognizable to fans of another rock icon.

Buble said her late father was a Dylan fan, but “it wasn’t like I sat around listening to his music or looking at his picture.”

She approached him and asked his name.

He told her he was Bob Dylan.

She asked sarcastically if that was his real name. He said, no, my real name is Robert Zimmerman.

She asked what he was doing at the West End Court address. He said he wanted to see the house where Bruce Springsteen wrote “Born to Run.” Springsteen lived at the address from 1974-75 and wrote the entire iconic album while residing there.

“Well, what are you doing in town?” she asked.

He said he was on tour.

She asked where he was staying. He gave the name of a luxury ocean-front hotel.

She told him to get in the car and she’d drive him there. She said she was all the time assessing the situation for what she could tell the people in the ER.

“He told me to take him to the hotel and he’d get me tickets to that night’s show and I could see him play. He said that and I thought, ‘This guy is just nuts.’ I thought maybe he was a lunatic imposter.”

And he wouldn’t shut up. He told Buble he was famous for singing and writing songs. “It didn’t occur to me,” she said, “to ask him to sing me a song.”

She calculated the most sensible course would be to take him where he wanted to go and have the people who say they knew him either vouch for or refute his identity.

“We drove up and there were all these tour buses. I helped him out of the car and his manager comes running up and just flips out. He’s yelling, ‘What have you done with Bob! Don’t touch him! Don’t talk to him!’ Just being a total jerk. A real pompous asshole.”

She said her back-seat passenger was the exact opposite.

“Oh, Bob was modest, calm and chill. I never once thought, oh, this guy’s such a total jerkoff and I’ll never think of him the same way. Bob Dylan was nicer than 95 percent of the people I deal with every day.”

Buble’s tale set in motion an enduring daydream of me risking all to impersonate a police officer and incarcerate Bob Dylan for a cross-country joy ride of just me and him shooting the shit.

Winning the Nobel for Literature has landed him in the news once again, but when isn’t he?

It happened again with Bob on "Walking Dead," proving he lives even among the undead.

The show rebounded from its horrific season opener by a more character-driven episode anchored by a magnificent a cappella gospel version of “Don’t Think Twice It’s Alright.”

When people ask if a singer-songwriter is deserving of the Nobel Prize for Literature, many say yes and cite the duration of his lyrical contributions for nearly 60 years.

I say he deserves it for a contribution that lasts 11 minutes and 6 seconds.

Truly, it sounds like a Larry McMurtry novel. It’s a sprawling story that combines gunfights, painted deserts and an enduring love for Gregory Peck films.

My favorite line: “Strange how people who suffer together have stronger connections than people who are most content.”

I didn’t hear it until 1994 when I finally bought my first Dylan album. It was Greatest Hits Volume III, which I bought for the heart-seizing protest song, “Hurricane.”

Really, I felt zero warmth for Dylan’s songs or persona until he hooked up with the Traveling Wilburys. That’s when I first got the sense that he doesn’t take himself as seriously as the rest of us do.

He remains controversial. You either love him or you hate him. There’s no middle ground.

It’s as if he’s running for president.

I wish in these divisive times, I could take all the individuals who hate for one reason or another and sit them in my office with me to sip beers and crank Dylan tunes until a light goes off in each and every one as to why he’s so essential. So fun. So edgy.

He’s so much more than what he told Officer Buble he is. Yes, he’s singer, a songwriter, a performer. But he’s something more binding.

He’s a conversation we can always have.

Like baseball, he’s an elemental stitch in the American fabric.

Even his relative peers appreciate his peerlessness.

So, yes, give him the Nobel for literature and the Oscar for acting humble in the back of a Jersey squad car.

In the end, Officer Buble is proved correct.

Bob Dylan is a wanted man.

Happy Birthday to Bob Dylan (and this blog)!