Breaking news: Rats are ticklish! Are you? 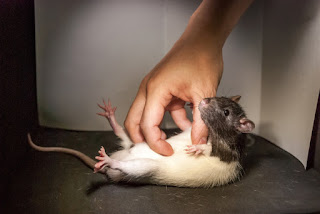 Researchers are giving one of the world’s most loathsome creatures a playful makeover.

We now know rats are ticklish.

And I thought all they did was scamper through sewer pipes to spread things like plague.

Rat ticklers — and isn’t that an offbeat job description? — at the Bernstein Center for Computational Neuroscience in Berlin found that rats relish a good tickle.

They said the tickled rats emitted detectable laughter, jumped for joy and squeaked the rat equivalent of “More! More! More!”

Makes me wonder what the scholarly reaction would have been had researchers taken things a step further and given a little rat hand job.

They say the studies are important because they reinforce the notion that laughter and play are essential to all healthy animals, human animals included.

Ticklishness may be, they say, hardwired in all of us, a trick of the brain to make animals and humans play or interact on a fun level.

With that in mind, I’m thinking of altering my standard street corner howdy-do. Instead of my usual two-pump manly firm handshake, I’m going to — quick as lightning — reach up under the greeter’s shirt and go right for the armpit.

As an experienced tickler, I find that to be the most ticklish spot on a vertical human being. If the armpit is well defended, I go for the hip protrusion.

The key is speed, surprise and vigor. Depending on the rigidity of the tickle subject, you might want to use a knuckle.

I ought to know.

My tickle techniques are taught in school.

I learned this a few years ago from my then 6-year-old-daughter.

Any father of daughters especially who isn’t a tickle expert simply hasn’t read the Daddy playbook. Or play book.

A well-tickled daughter is a joyful daughter. I have two of them.

For years, both would whenever they were told to raise their right hands instinctively place their left hand over the exposed armpit to prevent a sneak tickle attack.

I guess the little ones were on the playground discussing ticklishness. They all said they were ticklish to various degrees.

My daughter admitted, yes, she was a wee bit ticklish.

An innocent friend made the mistake of lightly running her fingers up my daughter’s arm, which she felt necessitated some playground education.

Oh, I wish I could have seen it. The way she described it made it sound like a martial arts exhibition. This arm went up, a chin drove into the rib cage, dust flew. It was full-contact tickle.

If the kid wasn’t laughing so hard she’d have surely been treated for trauma.

God, could America use a good tickling right now.

I’ve haven’t seen so much bickering among Americans since — speaking of rats — the “Sopranos” finale.

I wish I could help. I wish I could one-by-one take every American and give you all the kind of cathartic tickling that reminds us of how great it feels to just let it all go.

I wish I had the guts to apply some tickle therapy to crabby strangers I see on the streets.

But we know what would happen.

The strangers would react with disheveled fury. They’d be incensed. The liberals would stab me with their safety pins; the conservatives would unholster their concealed firearms and orphan my daughters right there on the street.

All because I wanted to make the world a happier place.

Yukkin’ it up over laugh track history

"little rat hand job"
Truth in the pursuit of knowledge!
tension release and well being,funny how We are being stimulated to respond to borders of personal or group identity or space with a fixed controlled reaction of defense.
Is it a form of social engineering based on the anti- tickle?

You know, I almost took that rat hand job line out for reasons of taste, but I thought it would be a betrayal of the friends who knew me best. I was right to leave it in. Thanks!