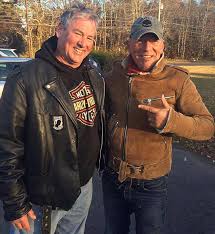 It made me sad and confused when I read Bruce Springsteen suffers from prolonged bouts of deep depression.

Hasn’t he seen the Muppet movies? It’s impossible to be depressed after watching those hilarious flicks.

That Springsteen gets depressed shows how pervasive depression can be.

The man’s moved 64.5 million records, sells out multiple 20,000 must-see concerts in 15 minutes and has composed the soundtrack for America.

Heck, he was paid a $10 million advance on his book.

Given those surface facts, you know who really ought to be depressed?

Just writing about his depression depresses me. It’s not like his career ended in 1992 with “Pony Boy,” when, really, it should have.

So now I’m on alert for anything that might further depress this marvelous man I consider so vital to our national psyche.

Of course, it happened just this weekend.

His motorcycle broke down.

Now, I doubt that made him sad. He may have said dang or poop, but I don’t think things like mechanical breakdowns depress him.

But I’ll bet the events that followed did.

A group of friendly New Jersey motorcycle enthusiasts — and that’s the PC phrase for bikers — saw a stranded cyclist and pulled over to help.

I don’t know if they’d have driven by if the disabled two-wheeler was pink and appeared to be a homosexual vehicle or if maybe the rider was wearing a leather Burqa. I suspect they stopped to help because they were just good guys.

They certainly didn’t know or care, I guess, that the owner was one of the world’s most famous and beloved rock stars.

“The moment I got off the bike I saw it was him,” said Dan Barkalow. “He was a real nice, down-to-earth guy. It was nice to help out.”

They drove him to a nearby restaurant and the Boss bought everybody drinks and they talked for an hour.

And everyone lived happily ever after, right?

Wrong. After the biker group posted a yippee! note about the experience they were besieged by Bruce-haters who condemned Springsteen for supporting Hillary. Barkalow said the vitriol was disgusting.

I’m sure Springsteen felt a wave of sadness over the inexplicable reaction.

It depresses me because if you can’t get over Bruce Springsteen supporting Clinton, how will you ever get over guys like me?

I tried to think of a comparable analogy of someone beloved by the right who liberals would be surprised to help if we saw them stranded as we approached in our Earth-friendly fleet of Priuses.

It had to be someone who the right reveres the way, gee, most of America reveres Springsteen, someone inspirational, someone the hardcore love without reservation.

I came up with Dick Cheney, Sarah Palin and the guy who played Chachi.

I went with Cheney because Chachi’s a bit of a mope and because Sarah’s just so smoking hot she wouldn’t have any trouble getting a road side assist.

Let’s say Cheney’s battery died and I stopped to give him a jump — and I mean his vehicle’s battery, not the one in his pacemaker.

I wouldn’t lecture him on his Iraq War bumbles, his ardor for criminal torture or if he thought it was funny that the guy he shot in the face apologized for letting himself get shot in the face.

I’d just try and help because, like those unsung Jersey bikers, that’s what good people do.

We’re being lectured about how we need to get over and, of course, we do. And I’m trying.

But it doesn’t help when we hear stories of people who so haughtily deny being deplorable racists doing things that are so deplorably racist like declaring Michelle Obama’s an ape in high heels.

We need to celebrate without reserve our great American icons, even ones with whom we disagree.

You do it for our Springsteen.

I’ll do it for your Chachi.

And if you’re still feeling bitter, might I recommend The Muppets.

Despite what you’ve been conditioned to think, there’s nothing icky queer about their rainbow connection.

The Boss for God: a concert review

The Good, the Bad & the Springsteen concert