Life & death of the prisoner with the big penis 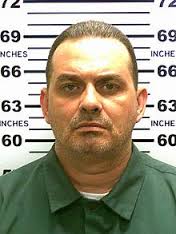 It wasn’t the kind of description I’d ever heard Det. Joe Friday give on any of the old “Dragnet” APBs for escaped criminals.

“When he’s all cleaned up, he’s very handsome and, in all frankness, very well-endowed,” said retired Det. David Bentley of Richard Matt.

Matt, 49, as you probably know, was one of two since-captured escaped prisoners from the Clinton Correctional Facility in Dannemora, N.Y.  The escaped killer is now shot dead and, I guess, being fitted for a teepee-shaped coffin.

The only way I could see it being relevant is if Matt had lost his pants during the escape.

And just how did Bentley know?

We’re all familiar with the convict mug shots that depict the vertical inches of each inmate.

Who knew there were horizontal ones?

I read the quote about three times the day I saw the Washington Post story about Matt and co-escapee David Sweat. I still had trouble believing what I’d read.

Then my buddy Paul, a veteran newspaper reporter, came into the bar for our Friday guzzle.

He asked if I’d seen the quote. He couldn’t believe it either.

The story was very compelling. One detective said Matt was “the most vicious, evil person he’d ever come across in 38 years” of police work. Law enforcers, Matt acquaintances and family chipped in their descriptions. They said he was charming, brutal and savagely brilliant.

Then appears Det. Bentley’s quote saying, psst, and the guy’s got a huge penis.

In context, it was one of the most odd quotes I’d ever read.

We were both surprised the reporter included the quote and that the editor deemed it newsworthy.

As newspaper people, that last point is key. If I’d been the reporter, I’d have had multiple follow ups.

Just what did Bentley mean by “very well-endowed?” Just how many big penises has he seen?

Because the only way I could see Bentley’s observation being relevant is if this was a really, really big penis — the kind that could be spied on Google Earth.

That would change everything.

CNN would break in with an alert that read: “New York authorities are on the look out for an escaped penis that broke through walls of the Clinton Correctional Facility. The penis is to be considered armed and dangerous. If you see this penis, you’re advised to contact authorities and do not to try and capture the penis yourself.”

Maybe they didn’t do it that way because it might risk confusing the public.

I’m familiar with that part of New York. There are giant pricks perched on nearly every other bar stool.

It is said Matt died drunk. His body was said to have reeked of gin he’d stolen from a nearby hunting cabin.

And he was violently ill. Police speculate a combination of bad mountain water, lack of food and sleep and the constant exertion of being on the run got the better of him.

His son told reporters that Matt had been traumatized by being locked in a car as an infant, and that’s what led to his mis-spent life.

Bentley’s observation leaves what they depict in New York open to speculation.

Or maybe I have that all wrong.

After all, who doesn’t want a really big penis?