I stop blogging for week in West Virginia; readership surges 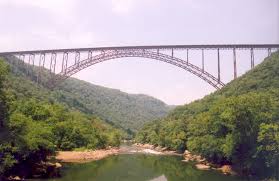 One of the most unsettling aspects of me being a blogger is how blog readership invariably surges whenever I take a sustained pause in blog writing. Happened again this week. We took a family trek across wild, wonderful West Virginia and I hastily posted just one uneven, typo-laden piece.

Yet, my stats page showed a huge readership spike. It was the blog’s best week since a bunch of readers discovered my post explaining why everyone hates former KDKA-TV news lovely Patrice King Brown (link below).

The charge was led by the French — and I’ll make no cheap jokes about wine-loving people who’ve suddenly become my friends. For reasons I cannot fathom, more than 500 readers in France chose the week I wrote hardly a word to go nuts for the blog. They immersed themselves in dozens and dozens of unrelated posts from throughout the blog’s now seven-year run.

But now I’m again left to ponder the wisdom of frantically posting near daily when the readership increases whenever I don’t.

Will I finally succeed as a blogger the day I decide to forever cease blogging?

Well, that’s not going to happen for a while. Too many fun stories to share from our week, many of which I’ll be posting in chunks over the next few weeks.

And that was just in the first afternoon!

Our first stop was Stonewall Resort in Roanoke, West Virginia, home to one of my favorite golf courses on the planet. It’s The Palmer Course, one of Arnold Palmer’s best designs. Our stay there was emblematic of why I’m always broke but am always having fun. I’d done some writing work for my good friends there and they offered me a choice: Did I want a check or would I accept equivalent trade in party time?

Care to guess my choice? Of course, I took the freebies.

Who’d rather have actual money when you could create so many happy memories?

All you solvent people can sit back down now.

I do love Stonewall. It’s the last golf course my father ever played and some of his ashes are scattered there among the lush property. So it was a poignant few hours teaching his granddaughters (and daughter-in-law) why I so love golf played on a course as lovely as Stonewall.

It was twilight and we had the course to ourselves. My entire goal was for them to each hit some good shots and see why golf means so much to me.

It worked. Each enjoyed the thrill of seeing the ball soar off the clubface, often after a humbling whiff or two.

Val, who, indeed, did well, said: “I always figured if I gave it a real shot, I could get pretty decent at golf.”

Somewhere I heard the ghost of my father cackling.

• We all agreed our most arduous activity took place at Adventures on the Gorge, overlooking the spectacular New River Bridge, which is featured on the back of the West Virginia commemorative quarter.

The activity wasn’t white water rafting, zip lining, a tree top canopy tour or any of the other thrill sports AOTG offers.

Nope, it was the ducky boats. I had Lucy, 8, in mine and Val and Josie, 14, where in the other. The rapids were great. The problem was there were too many what I guess you could call slowpids.

These boats seemed to resist the current. There was no drifting. It was about five hours of non-stop paddling. Plus, when your first mate is 8, there is so much zigging and zagging it felt like I was navigating the river upstream. Twice!

• Whenever one of our guides asked if anyone had any questions, I always had to resist the urge to raise my hand and ask, “Are you high?”

The guides all look like hardcore stoners who devote their lives to getting high in ways that have nothing to do with altitude. But they literally have our lives in their hands and I have to think they’re drug tested. It must be tough for them to choose lifestyles.

• Having said that, AOTG guides invariably become some of my very favorite people. They are so fun, so funny and so full of joyful exuberance I’d think about becoming a hippy and joining them if, alas, I only had the hippy hair.

• We loved the zip lining through the treetops, but the coolest thing Josie and I did was the two-hour Bridgewalk. The monumental bridge, built in 1977, has a maintenance catwalk 30-feet beneath the bridge surface. Area hooligans used to on dares sneak out onto it to scrawl their names or sip a beer.

Then 4 years ago entrepreneurs got permission to attach safety features and opened it up to tourists at $79 a stroll 851-feet above the rocky shores.

I’ve gone skydiving, wrestled alligators and just two years ago did a static-line leap from atop the Stratosphere in Las Vegas (link below).

Of the latter, I was only afraid for about 30 seconds. Here I was scared for about 90 minutes. The thing shook with every passing truck.

But it’s something I’ll never forget and had I for reasons of nerves passed it up, I’d have missed out on a story I’ll tell the rest of my life, one I promise to share Monday here on the blog.

• Our last stop was The Greenbrier, which calls itself America’s Resort. The nickname is, in fact, a understatement. It is the most fabulous place I’ve ever stayed. It is American history drenched in elegance.

In fact, history was why I was there. Working in secret connection with the federal government, The Greenbrier was enjoined in 1958 to execute Project Greek Island, more commonly known as The Bunker.

It was where the entire U.S. Congress would be relocated in the event of a nuclear attack on Washington. It remained secret until 1992 when the story finally leaked.

The story allowed me the opportunity to share the many splendors of this magnificent resort with the ones I love most.

• It was a week of blessings and I’m again left to wonder about this peculiar life of mine, one that is rich in so many ways, yet seems destined to ensure “rich” is one word that’ll never apply to me.

On this puzzling contradiction, it seems I’m forever destined to muse.

Oh, and while I was away two of my best buddies left a legal eviction notice on my desk. I have 30 days to vacate The Pond.

I’ll probably write about that on Tuesday.

With hype like this, readership is bound to plunge.