@8days2Amish tweets of the month! 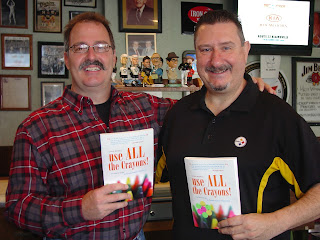 June ‘14 was one of the worst reader months I’ve ever had as far as blog readership. Where’d you all go? The numbers made it seem like everyone simultaneously just got fed up and quit. Well, everyone, but me. I still kept up the prodigious output, one of the most robust of any real blog in cyberland. But should I gear back this month? Not a chance. Well, not much of a chance. The calendar is filling with recreational activities and what’s the point of being a professional blogger if you can’t behave unprofessionally every once in a good while? Maybe I'll spend more time yapping with my buddy, Dave (above, right). That's always time well spent. As for @8days2Amish tweets this month, I think I’ve settled into a pattern where I’m less prolific, but am producing what I think are better tweets. Lots of thoughtful bits of wit. Hope you like them and that your summer’s off to a roaring start.

• Jesus walked on water. When He comes back, how many think He'll opt for spiffy new Sea Doo?

• Because I can never remember which is which, I propose we rename Vermont "6" and New Hampshire “9."

• I always like the underdog thoroughbred even as I wonder why it's not an underhorse. #KentuckyDerby2015

• I’d like to attend a church where the pastor says, "Spoiler alert!" before even familiar Bible stories like the crucifixion.

• I know truly evil souls go to hell, but what about simple jerks? My heaven will be hell if there are as many jerks there as there are here.

• Historians devoted to revolutionary study know better than most what goes around comes around.

• After watching HBO's "Montage of Heck," I can only conclude if Kurt Cobain were alive today he'd still be dead.

• People everywhere climb mountains seeking the meaning of life. Don't bother. I looked it up. It's not that big a deal.

• Bedlam is an uproarious situation. Bed lamb is a rural scandal.

• Phone etiquette will improve & and solicitors more circumspect when an app is developed that let's us shock callers.

• I wonder how many white guys named Cliff live within walking distance of the White Cliffs of Dover.

• New neighbor told me she loves it here. "Everyone is so nice," she gushed. Told her if that's the way she felt she’s yet to meet everyone.

• I wish no ill on any being but I hope for the sake of Earth's collective cool that Paul outlives Ringo.

• Let me get this straight. Taylor Swift was once considered country, but now isn’t. So Taylor Swift is like Steve Earle?

• Sign all birthday cards, “And may this year you at last be as happy as all your Facebook posts misleadingly seem to indicate you are.”

• If I could go back and re-write "Mad Men," I'd rename the main character Don Drinker.

• One of my problems as a writer is that I'm so well-rounded it's geometrically impossible to ever make ends meet.

• We now have ability to forever preserve things that 10 years ago we would have destroyed as being too stupid for anyone else to ever see.

• It makes me furious that word that's pronounced "Q" is spelled "queue." Someone's messing with Sasquatch.

• I’m a liberal who prefers the social company of conservatives as long as they don't talk about conservatism which they can't so that's that.

• Due to technological advances involving titanium joints, the old “shinbone’s connected to the knee bone,” song is losing validity.

• I wonder if smart alec bacteria ever still introduce themselves with “Spoiler alert!” at fridge parties and still think it’s funny.

• Anyone who aspires to teach the whole world to sing in perfect harmony has never spent a minute at a karaoke bar after 10 p.m.

• Because he's one of our most buoyant and charming celebs, I propose we rename Henry Winkler "Henry TWINKLER!”

• It must infuriate accomplished banjo players that the two best known practitioners of the instrument are Steve Martin & Kermit The Frog.

• Xanax? Valium? Neither. Our most addictive painkiller is the tepid rewards of soothing mediocrity.

• Most adults as they become older don't so much solve problems as exchange them.

• For the sake of recycling, I dream one day of seeing a cell phone tower made entirely of discarded cell phones.

• Marijuana smokers who succumb to repeated bouts of the munchies are apt to get pot bellies.

• How come a protest has such negative connotations and a contest the opposite? I'll one day weigh the pros and cons of discrepancy.

• I wonder what they told instead of knock-knock jokes before the advent of doors.

• People say "not a snowball’s chance in hell,” like they know forecast. In my hell, there will be tons of snow.

• I wonder how many angels regret they weren't more human when they were still human.

• I’d like to see how a proctologist responds when angry patient tells him bill's too high and he knows what he can do with it.
Posted by Chris Rodell at 9:15 AM

Be careful how broad thy brush. I can talk about conservatism. Succinctly, less government, lower taxes and maximum personal freedom.