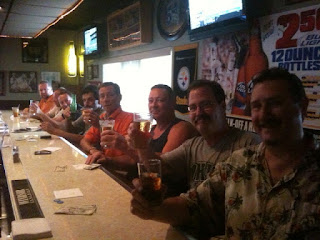 It’s not the kind of thing sensible adults brag about, but a long time ago on a weekend roadtrip I was thrown out of every bar in Oxford, Ohio, home of Miami University.

I wouldn’t exactly call it a quest. It just kind of occurred.

That kind of thing is bound to happen when you’re drunk, dressed head-to-toe in Ohio University Bobcat gear and yelling, “Miami Sucks!” which is what we yelled even when we roadtripped to unrelated places like Michigan.

Looking back, I have to admire their efficiency. It’s like they had some kind of campus watch out to make sure I wouldn’t get served for more than two or three drinks in any of the town’s five lame bars.

Sort of like an Amber Alert for common assholes.

I hope there are no hard feelings. By now, I’m sure most of the Miami students involved in tossing me from their bars are gainfully employed tapping your phone for their NSA overlords while I’m sitting here blogging about a childish 31-year-old grudge.

Maybe now they’ll realize I was right all along.

I’m getting thrown out of The Pond.

The comparison might be a bit on the audacious side, but it feels to me like Elvis getting thrown out of Graceland.

I have no proprietary claim on Latrobe’s best bar, but it sure feels like home. One of three second-floor apartments has been my office since 2007.

The bar (and the building), owned by three generations of the same wonderful family for 61 years, has been for sale for about eight months.

A solid group of friendly buyers is coming in. I won’t deal with any of the speculation, but this is looking like a best-case scenario for Pond drinkers.

Just not for Pond renters.

It’s a stipulation of the closing that the second floor be vacated. The eviction notice says I have to be gone by July 11.

Where will I go? What will I do?

Will I be forced to work from, gulp, home?

I think I speak for my family in saying we’re all praying it never comes to that.

See, I call this an office, but it’s more like a little clubhouse, what a 10-year-old boy would call a fort.

Here a guy can do what guys do. My unofficial motto’s always been: “Welcome Men! My door’s always open and my toilet seat is always up!”

By most male standards, it’s tidy. Sure, there’s mustache clippings all over the sink and I only bother to vacuum once a year, but it’s no pig stye.

It’s been a place I can come any time of the day to write, blast music, read, juggle or just organize my thoughts without interruption.

Josie says she’s going to miss all the times on “Take Your Daughter to Work Day” when we’d hide behind the curtain and push my car fob’s red horn button the instant some unsuspecting lunch guest tried to remotely lock their car.

The sound of my nearby car honking madly would invariably startle them into pushing their own buttons. Parking lot mayhem would ensue.

What will I miss most?

The Pond the way it was.

Because for 7 years, I could at any moment slam the lid on my laptop and walk downstairs and be greeted by Dave and up to 20 friends who were glad to see me and eager to laugh.

We’ve had so many magical times together. The regulars have been such a great mix of guys — football coaches, executives, teachers, farmers, businessmen, lawyers, newspaper reporters, plumbers, the mayor and just enough jackasses to keep it lively.

We’re all naturally resistant to even healthy change. Why wouldn’t we be?

Who in their right mind would want to change something that for so long seemed so perfect?

So am I angry I was given an eviction notice June 10?

See, June 6 was the day I chose to do the yearly vacuum.

“Use All The Crayons!” YouTube promo (from my office!)