Bribes, hookers, egos -- why FIFA scandal promises to be so much fun 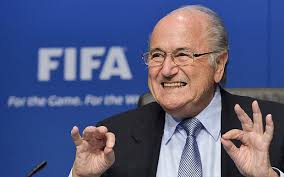 I like it that American sports fans still care more about a dozen or so under-inflated footballs than a multi-million dollar bribery scandal involving human rights violations, oppression and the unifying passion of the rest of the entire planet.

We’re talking about soccer, that other marathon competition that always seems to end in a confounding tie.

And how does a spelling bee end in a tie? A spelling bee shouldn’t end in tie until every word in the dictionary is exhausted and the last kid correctly spells zythum.

We’re two days into the exploding FIFA scandal and I’ve still yet to get a handle on the facts.

With scandals like this, I generally don’t begin paying attention until the headlines start including the word, “Kinky.”

So to me the FIFA scandal is like your typical bachelor party: Things don’t start to get really interesting until somebody yells, “Here come the hookers!”

I understand the top FIFA officials are being charged with accepting bribes to award prestigious World Cup host privileges to Russia and Qatar, repressive nations with abysmal human right records.

Me, I become suspicious whenever I see any nation being selected for international honors and realize neither’s ever been a prize destination on “The Price is Right” Showcase Showdown.

What? Did North Korea miss a bribe deadline?

But I sense I’m about to become riveted by the scandal because stories have alerted me to the existence of a colorful scapegoat, one who coincidentally likes to boast he’s goat-like.

I generally dislike anyone who calls themselves something like Sepp Blatter because their names seem like typos and alert readers think I’m being sloppy.

Blatter is the 79-year-old FIFA president.

He’s going to be fun to watch because he’s the kind of multi-millionaire who thinks he’s the pope, only if the pope were Hugh Hefner. It’s surprising to American sports fans, but he’s incredibly powerful and treated like a head of state around the world.

He’s a former Swiss wedding singer and past president of the World Society of Friends of Suspenders.

His second marriage was to the daughter of his boss, then FIFA general secretary Helmut Kaiser. It was said the father-of-the-bride was so distraught he refused to attend the wedding and spent the next week weeping inconsolably.

If there’s to be a Deep Throat emerging in FIFAgate, the smart money says it’s bound to be Kaiser.

His third wife was also 30 years his junior and listed “dolphin therapist” as her occupation. I wish I’d have known there were dolphin therapists before I decided to pursue a writing career. Dolphin therapy seems fun, easy and the “office” hours ensure your tan’ll never fade.

Plus, who the hell’s ever heard of a melancholy dolphin?

They, too, divorced and for the last few years Blatter’s been bragging he’s “married to futbol.”

So now instead of screwing comely dolphin therapists, he’s screwing everyone who cares about soccer.

He says he has no intention of resigning.

So it’s going to be fun for even non-soccer fans to watch this scandal unfold.

I suspect we’re going to witness the spectacle of a former friend of suspenders being caught with his pants down.

It’ll be refreshing in a way to see a sports scandal that doesn’t involve balls being deliberately made smaller.

If there’s one thing Blatter and his cronies need not fear, it’s having tiny balls.

Why soccer/metrics won’t ever measure up